ARC Review: With You (Tear Asunder, #0.5) by Nashoda Rose 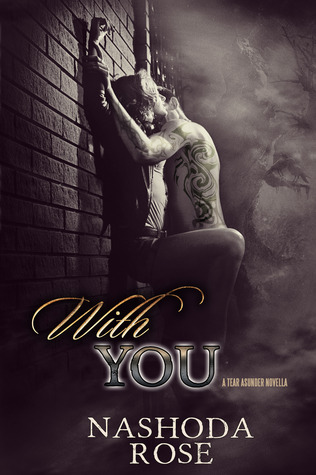 
"Sculpt is an illegal fighter.
He’s also the lead singer of a local rock band.
No one knows his real name.
And from the moment I met him, he made me forget mine.

In order to convince Sculpt to give me self-defense lessons, I had to follow his one rule—no complaining or he’d walk. I didn’t think it would be a problem. I could handle a few bruises. What I hadn’t anticipated was landing on my back with Sculpt on top of me and my entire body burning up for him.

I tried to ignore it.

I failed of course. And having a hot, tattooed badass on top of me week after week, acting completely immune to what he was doing to my body—it was frustrating as hell, so I broke his rule—I complained.

Then he kissed me."

What the... With You by Nashoda Rose is a short introduction to her Tear Asunder series that will be published on the same day as a first novel, Torn from You. I am not usually happy with this kind of reads, but With You was perfect. It gives you a small perspective of characters and their lives "before".

The ultimate alpha male of the bookish world. You read book description? I'm guessing that one of the things you're thinking is what BS is this - fighter, bloody illegal fighter, singer in a rock band and that name Sculpt! What the hell? Trashy... Ummm...No! Do not mind the blurb, because this novella is so much more than a chliche. Okay, it is based on typical premise - bad boy, tattoos, shady past, man-slut vs. good girl, virgin, almost zero confidence and messed up family. But don't we love this kind of stories when they are well written??? And this one is so good.

Imagine what would you get if you could put Remington Tate, Travis Maddox, all the boys from Sinners and a dash of Caleb in one person? Can you imagine him? Even thinking about that guy makes my ovaries melt into the puddle of estrogen. Nashoda Rose wrote that man for us.

I am not known because of my love for virgin characters - they are the most annoying kind, but Emily wasn't a girl that made me hate her. There is a reason for her behavior, she doesn't fake her modesty. I loved interaction she had with Sculpt - he didn't change suddenly because of the girl, but there are a lot of things from his past that come out because of her.

What was not so good - they keep saying each other names too much. Way too much... It was driving me crazy.

Who should read this book? Every girl with a functioning ovaries. Your inner cavewoman will have a blast. If you love characters with a darker urges and have mental orgasm every time you think about Travis Maddox, Remy Tate, Kellan Kyle, Sinners, Soren, Caleb - at the same time.