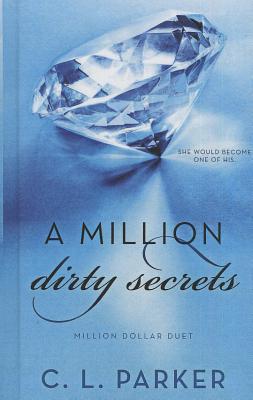 Noah doesn’t know why Delaine sold her body for a cool two mil. But it’s the perfect business arrangement. The inexperienced beauty will learn to satisfy his every sensual need, yet never touch his heart. Almost immediately their relationship generates heat—in more ways than one. When they fight, they take no prisoners. When they love, they show no mercy. When they’re together, they never want to leave each other’s arms. But soon, their intense, physical bond will take an unexpected turn—evolving into something neither has bargained for: the promise of a lasting love."

Published fanfiction. A Million Dirty Secrets is one of those popular novels in last few years - you know what I'm talking about. Fanfiction novels based on (mostly) Twilight. I will be honest and say that I love Twilight and that I enjoy reading a fanfiction if it's well written. According tho the TwiFanfictionRecs, this book was originally titled A Million Dollar Baby.

Is this a fanfiction of a fanfiction? I would be in my own little personal heaven if I knew about this book back when I had read Twilight first time. I would be over the moon happy and swooning over this alternative version of my favorite vampire. Today? Not so much. When a story like this is written just for fun, I don't think that some plot issues and similarity with other fanfics is a big problem. Author is aware of what she/he is doing and readers know what to expect. But when something like this gets to be published and promoted as actual original novel, I have big problems with it. Let me explain.
There isn't that much similarities with the Twilight when it comes to the plot. I'd say that it's more a Edward and Bella with a Pretty Woman twist. Only thing that can point you to the original story are Noah's family and their interaction, death of his parents and how he tends to be the one who's pulling a plug every time their sexual encounters get a little bit out of the hands. Oh, and don't forget lip biting. And of course she is a virgin. You probably wouldn't even notice any of this things unless you're experienced fanfic reader. I didn't mind any of those things, but what did bug was Delaine's conversations with her Coochie. I felt like I was reading Fifty Shades of Gray all over again. Maybe it would have worked out - like in the Wallbanger - but it was a such a bad choice for this novel. Main reason - when I started reading it, I didn't get the impression that it will be story  with humorous parts. I expected serious, heartbreaking fairy tale about love. All of those "conversations" didn't fit in with the rest of the book.

Did I like it? I did like it and I didn't at the same time.  As I said, I love fanfic, I know what to expect of this type of books, but A Million Dirty Secrets was a one with too many "eye-rolling" moments. First, this is not BDSM story ( I do not know who labeled it like that on Goodreads). It could be described as softer version of Fifty Shades of Gray. C. L. Parker definitely knows how to write a good steamy scenes - Noah is... Noah! Story on the other hand could have been so much better. Enjoyable, fun read - but do not expect something new.