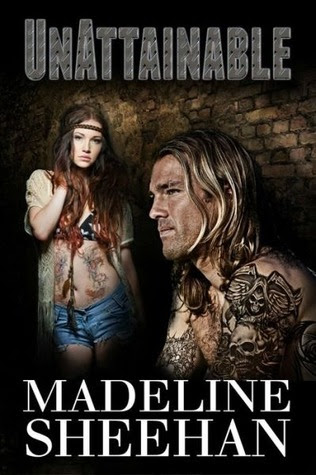 "Tegen Matthews is the daughter of Dorothy Kelley, a club whore in the Hell’s Horsemen. A plain little girl, Tegen falls into the gritty world of the motorcycle club. When she meets a sweet, caring boy, she embraces the warmth and affection he shows her. Cage West is the son of the president of the Hell’s Horsemen. Tall and blond with deep brown eyes, as he grows up Cage realizes the power of his dimpled smile and smooth drawl. With one chance encounter, Tegen becomes forever tied to Cage. Following is a wayward journey that is filled with regrets, mistakes, and heartache, pulling at the threads that hold them together. Cage and Tegen fight hard but love harder, and in the end, what matters is where the journey takes one girl and one boy, who have been twined with one another since the beginning.

This is Tegen and Cage’s story."

Back in the February when I read my first Madeline Sheehan book (you can read my review of Undeniable here), I was new to the whole big, bad bikers fictional world. I didn't even watch Sons of Anarchy - I had SoA marathon this summer - and my only biker experience was Reaper's Property by Joanna Wylde.

One thing that stayed the same is the fact that this author knows how to write - it's not pathetic, characters aren't talking like fifteen year old kids, it's like you can see this whole world in your head while you are reading. Madeline is that good with words. And if your ears are sensible, you are warned - her favorite word of the day is "fuck". Maybe she is even too fond of it, but... fuck it.:)

What is different? You get two stories - Cage and Tegen are central characters of Unattainable, but there is also sneak a peak in the life of Dirty and Ellie, Danny's best friend. There is much less "criminal" drama behind love story - this book is, at least from that point of view, tamer. There is no big age difference and Tegen is one tough cookie to break. Did I like it? Honestly? I am not sure. I have love/hate relationship with this series - I can't wait to read next sequel, I enjoy writing style, sex scenes can be hot as hell, but there are still some parts that disturb me or that just make me scream in complete frustration over female stupidity.
I know that most of the readers like previous books better and that one of the things they find lacking is Dirty and Ellie's story. I have to say that I found them more interesting than main train-wreck couple. By the end of the book, Tegen seamed inconsistent and little bit confusing, Cage with his rage and whoring. Ending was probably the weakest part of Unattainable - too rushed, illogical - I had a feeling like there should be more to their story.
General impression? Undeniable series is looking more and more like biker version of Black Dagger Brotherhood. Is that a good thing or a bad thing, it is up to you to decide.

I had so many conflicted emotions after Undeniable - at the same time I was totally hooked, I couldn't stop reading because I just had to see what will happen next, but on the other hand I just wanted to kick someone's ass for being stupid, I wanted to hate author for promoting all the caveman, repressive/traditional/patriarchal nonsense that millions of women fought to bring down. But after a while I realized that I'd been hypocrite. Why? Hmm... Let's see - I love reading about D/s relationships, I have soft spot for the very cavemen specimens Madeline Sheehan writes about and, for fuck sake, I am complete Stockholm syndrome freak. And in my free time I like to think about myself as feminist. So, I figured out that I am that "hysterical woman" from the beginning of 20th century - full of conflicted emotions and desires, body that is still under influence of its evolutionary animal part that seeks the alpha male in the group and intellectual being that thinks about everything and tries to distance itself from the animal part hiding inside.
What does that says about me and any other woman who recognized herself in all of the above? That we are crazy? Not normal? That even feminists are full of shit because they too have their inner "cave-female"? Or that human sexuality is not that simple? That our basic instinct to reproduce is one part our evolution left intact and now we have all this conflicted thoughts and desires? I don't know, I really don't. Only thing I can say for sure is that, like anyone else, I love sex and I don't care as long as I get what I want and need. Simple as that.
How about you? Do you feel like you're betraying your fellow feminists or you are just along for the ride?