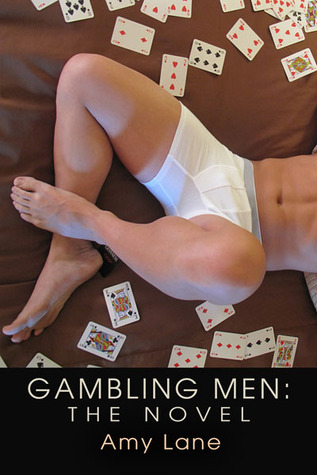 Quent Jackson has followed Jason Spade's every move in business and in poker since their first day as college freshmen. Eight years later, when Jace finally decides Quent is the one man he can't live without, he sees no reason for that to change.

But as much as Jace believes that poker is life, no one gave Quent the same playbook. After their first passionate night, the real game of love and trust begins, and Jace has been playing alone too long to make teaching the rules easy. Jace only speaks two languages: one of them is sex, and the other one is poker. Between the two, he needs to find a way to convince himself to take a chance on love—and Quent to take a chance on him. It's a lucky thing they’re good at reading the odds, because they’re playing for keeps, and this is one high-stakes relationship that's definitely worth the gamble.

"Sometimes, you can't win unless you lay your cards on the table. "

It's official- I'm a friends-to-lovers/ GFY romance addict and I'm not ashamed at all, lol. On the contrary, I plan to indulge in my addiction for many years to come. I have read only one book by A. Lane before this one- The Locker Room and it was a 3 stars read for me -meaning it was an okay read, I liked it, but there were some "issues" which prevented me from rating it higher, f.e. some frustrating melodrama and cheesy content.

That's why I was a little worried before starting this book, because books with cheesy content are usually a miss for me, but I was too curious and as you know- weak when it comes to this particular theme, so I picked it up. Besides, I haven't had much luck with f/m romances lately and considering my "addiction" I thought that this should be a safe bet. And the answer is- yes, it was!

The beginning could have been a bit better, it felt a bit rushed, but the more the story progressed the more I was falling in love with it and its main characters. Quent & Jason have been inseparable since the first day they met on collage. Jace was the typical jock- popular, fun and hot, the light of every party. Everybody wanted to be his friend, but the person with whom he connected the most was Quent. From best friends to roommates and soon enough business partners, they've been through a lot together and knew almost everything about each other except that one little secret which is about to come to light and change everything.

I loved both of the main characters. They were so fun and charming together and I was rooting for them since the very beginning. Jace, who seems closed off, short-tempered and distant at first glance and who rarely lets anyone get close to him and see him vulnerable, was perfectly balanced with the adorable, outgoing and a bit shy Quent. They simply completed each other and thank you Ms. Lane for not turning them into immature drama queens and commitment phobes when they faced some problems.

Their story was pretty light and drama-free. It wasn't anything unique or unpredictable, but for me the story made up for that with endearing character and their emotional journey. The ending was indeed a bit cheesy, at least for my taste, but it was the last few pages, so I could handle it.

Because of the shaky beginning and cheesy ending I was somewhat torn between rating it 3.5 or 4 stars, because to be honest I have read better books when it comes to this theme, books like Taboo For You by A. Sunday, but even if it wasn't perfect, I settled for 4 stars, because in-between A. Lane pulled out every possible card to make me love it.

Recommended to my fellow mm romance fans with friends-to-lovers/GFY addiction!

Purple
Posted by PurpleBook at 8:55 PM