Break Me Slowly by Joya Ryan 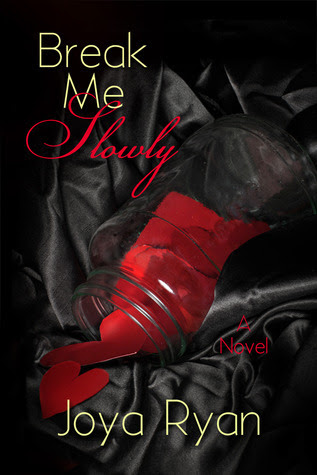 Summary on the GOODREADS:

Graduate student Katelyn Gunn is headed for her first day of assistant teaching when she is almost hit by a car. The nervous and inexperienced Kate is shocked to realize that it isn’t the near death experience that has her heart racing, but the sinfully sexy man behind the wheel. Adam Kinkade is ultra-wealthy, devastatingly handsome, and the most powerful distribution mogul in Chicago—he is also the first man who ignites emotions inside of her other than fear.

Adam is a man used to getting what he wants. And he wants Katelyn—naked and often. Willing to stop at nothing to possess her, he relentlessly peruses Kate only to discover that it is she who possesses him—completely.
Kate quickly realizes that Adam has secrets of his own, secrets dark enough to break the walls she keeps so firmly in place.

Passion turns to possession, and Adam’s controlling nature and seductive hands sparks a desire so strong, it destroys her own demons. But when desire turns to addiction, Kate fears that it will rage too hot, and shatter her sanity.

"I wanted him near, yet couldn’t run far enough away."

I usually avoid Fifty Shades Of Grey book-alikes, mostly because of the already billion times seen & done plot= one very fucked up/tortured/loaded & sexy Dom deflowering one very insecure, lip-biting, no self-esteem submissive, BUT from time to time I cave in when there's a beautiful cover and intriguing title involved which was the case with this book. This book indeed has some similarities with Fifty Shades of Grey- the Dom in question is very fucked-up, hot & extremely rich and the girl in question is a very insecure, lip-biting virgin and they engage in a very explosive, passionate and intense s&m relationship, but that's where the similarities ,as far as the plot is concerned, end.

"I was falling, and there was nowhere for me to land. Ever since Adam had come into my world, he’d clipped all the safety nets away."

Both, female and the male character of this book are damaged goods. They went through some pretty bad situations in their childhood which left them deeply scarred, both mentally and physically. They came out of these situations as survivors, but survivors with a lot of issues. Kate, for example, aside from having trust issues and low self-esteem, can't stand any kind of physical contact, not even a hug. Her family is fucked-up and she has only one true friend who is also afraid to come near her, because Kate might start having panic attacks she usually gets when she's afraid, stressed out or when someone touches her. She is a very guarded person and usually avoids any kind of relationship, especially boys, until one day she stumbles in front of Adam Kinkade's car. An event which changes  her life for good.

"He brought out things in me that I didn’t like. Like emotions in general. My eternal balance was being tilted. Too far in any one direction could be bad. I needed to shut it down before it took me over. This man was tempting me. Sucking me in. And damn if I didn’t want to get lost in it."

"But there was something more. Something almost broken that seemed to be buried deep inside him. Something that called to me. I wanted to dig into that side of Adam and latch on tight."

Adam is everything she's not- confident, direct, demanding and controlling. He's everything she's afraid of, well, at least everything she was afraid of before she met him, because fear is the last thing she feels for him. The thing she likes about him the most is that he doesn't treat her like a fragile doll that might break any moment like everyone else, but like a real person, like a real woman who she wants so desperately to be. But there's also darkness in him, one of the rare things they have in common, a lot of  shadows and ghosts from their past which keep haunting them every day and preventing their shot at true happiness. Their relationship is very passionate and explosive, with a fair share of ups and downs.

“We play by my rules in here, Katelyn.” He reached behind me and locked his office door. “Kneel.”

So what? You wanna play Name That Complex? One quick lay while you command me to call you Daddy?” “No. I want to sink my cock into you so deep that you scream with pleasure and call me lover.” He looked at my face. “And there will be nothing quick about it.”

This book wasn't perfect, but I liked it. The story was interesting, a bit predictable at times, but it also surprised me a couple of times when some things happened which I definitely didn't expect. The characters and their stories were also interesting enough, even though I also have mixed feelings about them. Kate was a bit too much of a submissive and passive in their relationship for my taste and Adam was a bit too domineering. It annoyed me how she was always the one to give in first when they had a fight or how she forgave him everything so quickly every time, even though he was mostly the one to blame for their fights. I wished she had shown more backbone in their relationship. The sex scenes were hot. They have a Dom/sub relationship, but these scenes weren't so heavy on BDMS which I  also liked. The ending was also a bit abrupt and too cheesy and romantic for my taste, but I know that most of the readers will like how the story will wrap up. All in all, this was a hot, little S&M book, not so big on the drama part and just with the right amount of kink.

He had shattered me. Any plan or idea I had about controlling myself, or my emotions, was gone. I could only hope that he’d catch all the pieces he’d broken and put me back together.

Posted by Anonymous at 4:26 PM