Take Me Breake Me by Cari Silverwood (Blog Tour & Giveaway) 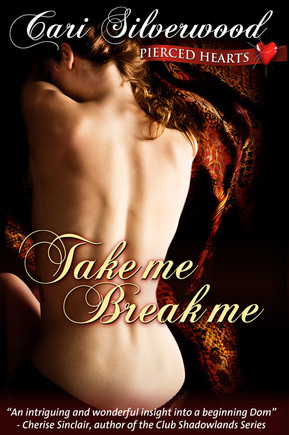 
"Jodie is scraping the barrel trying to stay afloat. An idea arrives that could rescue her finances and bring her together in a kinky way with a man she never gave up on. She's terrified and fascinated, and tempted as hell. Capture fantasies rule her eBook. Re-enacting one in a documentary would surely be irresistible viewing to millions of women? But Jodie and Klaus discover that underneath an ordinary man dark desires may lurk. What will win in the end? The man and lover, or the monster?"

How do you find ideas for your books?

That would have to be both one of the hardest and one of the easiest questions. Easy, because in a way, it just happens. But if I just leave it at that there won't be much said here! Hard, because if I get down to details, ideas come from everywhere. Which ones you follow up and even which ones seem even interesting to start with, all stem from who I am, and where I aim to go with my writing.
You can get ideas from friends, from TV, from radio, from other books, from life in general. But a single idea does not make a full story, no matter how good it is. To create a book, you need to weave together several ideas, and do it in a way no one else has. I'd be bored if I felt I was merely rehashing someone else's story.
It’s said that there are no new ideas, and also no new plots. They've all been done before, and that's true. It's your own 'spin' that makes a story yours. It's all the extra details you pile in on top of one another that make the story zing.
Of course, as I said, which ideas you run with depends on you. For Rough Surrender, my one historical erotic romance(though I'm planning a sequel), I was given that idea by my friend and editor, Nerine Dorman, when she suggested I read up on the Belle Époque time in history. That led me to Cairo and the first gathering of aviators in Africa in 1910, and to researching the first woman to get a pilot's license.
I like going a bit off the well-travelled pathways, which is partly why contemporary BDSM club stories haven't really been my thing. But I acknowledge they are popular, and now that I've written Take Me, Break Me, I'm a bit more confident that if I try hard, I may be able to do more contemporary stories. they might not be in clubs but I will be writing them. Take Me, Break Me is Book One in the Pierced Hearts series.
If you want to know where I got that idea, it built up over a while. I have read many authors of capture fantasies, from John Norman's Gor series to those by Kitty Thomas, and obviously I like them. I realized that they span from ones that have no romance and non-consent to those that are more dubious consent.  The ones I've read, the man is often not really someone you'd want to have as your partner in real life. Certainly he's often broken the law, and is not terribly moral, and he’s very self-serving. I decided to go with writing a capture fantasy in modern times, with two main ideas in mind. One was to make the man both understandable and likeable. I wanted the reader to sympathize with his choices. The other idea was to make readers think about capture fantasies in a new way.
Hard to do though – to get people to understand and like a sadist who comes really close to doing things to Jodie that she hasn't consented to. Have I achieved that? I'll have to wait to see, but so far I do know that readers are sympathizing with Klaus.


Cari is giving away a $20 Amazon Gift Card as a grand tour wide prize. Winner will be selected by Rafflecopter. 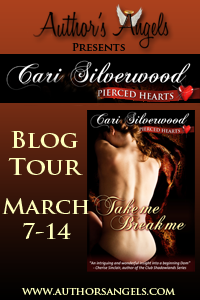