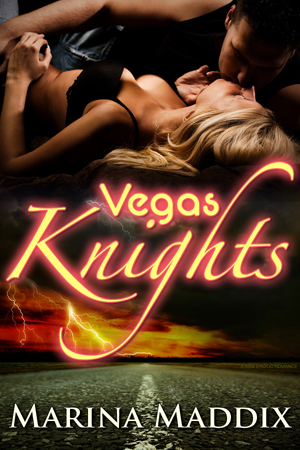 "After a passionate public encounter with a mysterious and very sexy biker, big girl Kelly Saunders finds herself on the ride of her life. Her 'Knight on shining armor' -- Rick Knight, billionaire heir to a motorcycle legacy -- whisks her away from her soul-sucking corporate job to Las Vegas, where she finds the road to love is treacherous.


As urgent business matters demand more and more of Rick's attention, Kelly is left to wonder about the future of their relationship. A ruthless betrayal throws her life into turmoil, and a devastating discovery threatens to pull them apart. Is their love just so much Vegas glitter or is it strong enough to survive beyond the dazzling lights of Sin City?"

"They sat entwined under the stars, swaying slightly with the rhythm of their own bodies. Rick's hands moved slowly from her hair down her back. Shivers of anticipation rippled through Kelly. They were going to make love under the stars. It had always been a fantasy of hers but she'd never imagined it would come true. But a lot of things she'd never imagined were happening lately.
Feeling the need to show him she wasn't some precious flower that needed tending and special care, that she was an independent woman, Kelly took control. His eyes never left her body as she moved to stand over him, legs spread, hands on her hips.
"Strip." The single word brought a knowing smirk to Rick's face. Without a word, and still never taking his eyes from her, he eased his off his jacket, throwing it aside. His gaze was positively smoldering as he loosened his tie and started to pull it over his head.
"Leave it." Kelly commanded on impulse. His hands paused, then dropped to the front of his charcoal Armani button-down, his eyes burning into her flesh like a brand. His fingers worked slowly, deliberately, intensifying her need for him. But she wouldn't give him the satisfaction of seeing her impatience. Cocking her hip, she let him tease her with his leisurely pace.
When the shirt was lying atop the leather jacket, he looked up expectantly, awaiting her next instruction. When she nodded toward his pants, triumph flashed across his face. She realized her mistake as he moved to stand. Once on his feet, he would tower over her, emphasizing her vulnerability and his dominance.
"On second thought, scratch that." One of his eyebrows shot up, and a look of exasperation took the place of triumph. She knew the score and she wasn't going to give him an advantage if she could help it. He leaned back on his elbows -- shirtless and irresistible -- and studied her.
She couldn't afford to make a misstep or show any hesitation. This had become less of a game for her and more of a demand for equality in this relationship. He may be rich, but that didn't mean he was in control here. Either he accepted that they were in this together, as equal partners, or he would be taught that lesson. Of course, she suspected that would be a lesson he might enjoy learning."

Marina Maddix is a romantic at heart, but hates closing the bedroom door on her readers. Her stories are sweet, with just enough spice to make your mother blush. She lives with her husband and cat near the Pacific Ocean, and loves to hear from her fans. Connect with her by email, on Facebook, Twitter, Goodreads or her website www.MarinaMaddix.com.
Marina's part of the Insatiable Reads book tour with 15 other sizzling hot romance authors. Different authors will be featured on various blogs throughout the month of March, culminating in several excellent giveaways. Check out the tour at www.InsatiableReads.com, where you'll find a schedule of Marina's other blog stops.