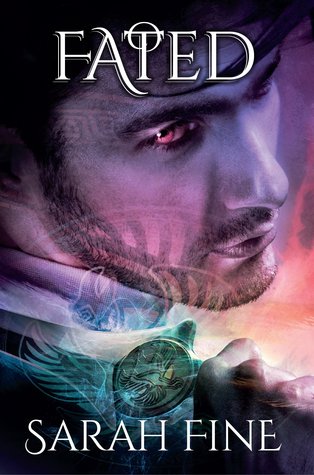 Aislin Ferry and Jason Moros have only days until they will be called to account before the Keepers of the Afterlife. Yet as they race to restore order and make their case, their worlds fall into total disarray.

Mutiny within the fractured Ferry family threatens Aislin’s hold on power and role as Charon. Meanwhile, the fearsome Lord of the Kere has family trouble of his own. Someone is unraveling the fabric of fate, and Moros suspects one of his supernatural siblings is behind the terrible bid to unleash Chaos.

Now unlikely allies, Aislin and Moros each need the other to escape the wrath of the Keepers. As the stakes rise, it becomes clear that protecting their respective empires is not the endgame. With the fate of all humanity dangling by a thread, Aislin and Moros must surrender completely to one another if they are to fight their common enemy. And as time runs out, someone must make the ultimate sacrifice.

"What am I to call you now? Lord? Mr. Kere?" He grinned.
"How about 'the agonizing death you won't see coming until it's too late'?" Moros suggested.

I had this arc for a while, but to be honest I kept delaying reading it, because in this installment we finally get the story of the most intriguing Servants of Fate character- the infamous Lord of the Kere a.k.a Jason Moros who has been my favorite character since the very first book- Marked (SoF, #1) and considering my mixed feelings about the previous installment - Claimed (SoF, #2), I was afraid that the author might blow it. Now, after I had finished reading it, I'm happy to say that the author delivered an engaging, action-packed, dark, suspenseful, emotional and hot story for the most part. In fact, I would dare to say that this is the best installment of the series so far, especially the 2nd half of the book. I did have some "issues" as always when it comes to the series, but all in all I was pleased with the out-come.

Unlike Dec and Galena from the previous book who seemed to me as quite one-dimensional characters, Moros was just the opposite- witty, intimidating and a provocative bad-ass  hero who kept me entertained as usual, even though in this book we get to see more the man behind the cold and calculating front he puts up for everyone. He had definitely found a worthy match in Aislin The Charon. The up-tight, diplomatic and serious Charon turned out to be more than meets the eye-  caring, more open-minded and showing some serious bad-ass fighting skills. Their chemistry was scorching and there's this one shower scene I wouldn't mind reading all over again.

The parts I wish the author had done a bit differently:
~ I wish she had made Moros' character a bit more edgier instead of humanizing him so much. This is a genre that allows that freedom the most imo and that's why I love it.
~ Some parts of the world-building are still a bit confusing to me, like Moros' family and their roles etc.
~ I felt that some parts of the story weren't given enough attention and the other way around.
~ And it also wouldn't have hurt the story if it had had some kind of 3-4 pages long epilogue.
All in all, I would give the 1st half of the story 3 stars, but the 2nd half 4 unputdownable stars, so I'll settle for 3.5 stars for the whole book. I wonder whose book is next? Hm, maybe Trevor's? I guess, we'll find out soon enough.
Watch out people! Chaos is coming... *scary movie music playing*

Posted by PurpleBook at 8:07 PM