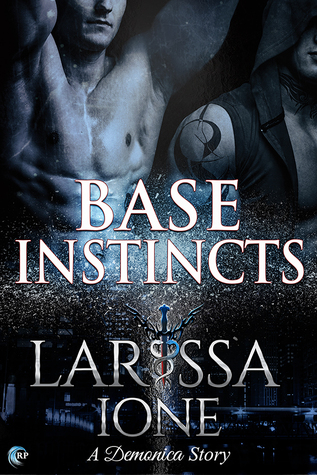 Synopsis On Goodreads:
As a Seminus demon, Raze’s life literally depends on having sex with females. The problem is that he doesn’t desire females, and it’s physically impossible for him to be with males. Thankfully, he and his best friend, Fayle, have an arrangement that keeps him alive . . . if lonely. He finds some solace in his work as a medic at Thirst, a vampire club known for its rough clientele. But his carefully structured world turns upside down when he meets a mysterious male who makes him want what he can never have.

Slake is an assassin used to getting what he wants, and what he wants is Raze. But he also wants to earn back the soul he sold when he was a much different demon. All he has to do is capture a runaway succubus named Fayle and hand her over to her family. What he doesn’t count on is being caught himself by a web of lies—and his attraction to Raze.

Raze and Slake must navigate a dangerous world to be together. But as Fayle’s jealousy of their relationship turns deadly, they find themselves embroiled in a battle not only for their love, but their lives and souls.

I pretty much loved the first 7 books in the Demonica series, so there's no one more surprised than me after rating this installment this low. I was ecstatic when I saw that Larissa Iona wrote a mm Demonica book so much that I requested the arc even after being 3 books behind, but maybe I should have waited until I had read the other three books first before jumping at this one. Maybe in that case I would have felt more connected and interested in the characters and the plot. Therefore I will keep this review short.

There are 2 main reasons for this rating:

~ The Plot
The plot was pretty average imo for an urban fantasy/ pnr romance and the best twists were anticlimatic and solved poorly and pretty quickly. Basically, I've read better and that's why I can't give it more stars.

~ The Chemistry
Or better say no chemistry between the MCs, at least not in the beginning. Sorry, but I just wasn't feeling it. I thought it was rushed and kind of forced. It got better later on, but still with some up and down moments.

There were some good moments which I enjoyed, but considering my "issues", the story failed to leave any bigger impression on me. I'm sure there'll be readers who'll think otherwise though, especially those who don't read as much as mm romance novels as I do. This one just wasn't for me, but I'll keep reading this series because the rest of the books were dark, action-packed, fun, emotional and steamy- the type of  books I prefer reading about. Read it and decide for yourself!