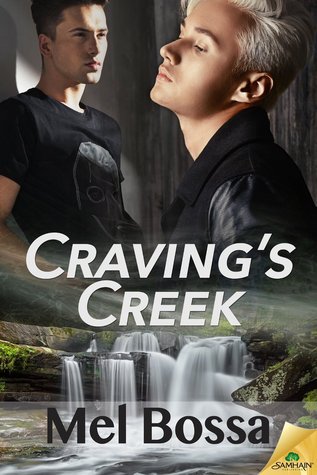 For the man he loves, he will fight—body, mind, and soul.

Fourteen years ago, on a sun-drenched summer day on the banks of Craving’s Creek, Ryde swore to his best friend, Alistair, he’d never be alone in the world. Though Alistair was destined for the priesthood, there was something beyond holy about the first kiss they shared.

But a fun camping trip went horribly wrong when Alistair was involved in a horrific incident.

Now, at age thirty-one, Ryde’s life is a mess of alcohol and the painful imprint of his last look into Alistair’s desperate eyes. Since the evil they encountered on that shore, his first love has been lost to him—until he learns a friend’s wedding is to be officiated by a priest named Father Alistair Genet.

Amid the rush of emotions, one thought crystallizes: Ryde’s love for Alistair not only has never died, it’s stronger than ever. Stronger than God. But it may be no match for the church…and the repressed memories that are slowly tearing Alistair’s mind apart.

Warning: Contains a drunken confessional, a self-destructive clergyman, and a fight to the spiritual death for love.

This book was NOTHING I expected it to be and I loved it. You can read the synopsis over and over again and believe me you still won't get the right idea about its content.

The story is a combination of a contemporary romance, psychological drama and at times it even has elements of a thriller. At the beginning we are introduced to its main characters- 17 year old best friends and neighbors Ryde and Alistar who are also secretly in love with each other. At first glance their life seems pretty ordinary with the usual teenage problems, but the more the pages turn the more we see that that's far from truth. The real truth is more ugly and scarier than that.

There is something wrong in Alistar's house and it has to do with his extremely religious and over-protective parents who aren't letting him have a normal teenage life, but instead keep him isolated from the other kids and keep pushing him to become a priest. Add to that his strange migraines and hallucinations he's been having since his 13th birthday and you have a recipe for a disaster. Ryde is the only thing in his life that keeps him sane, the only one who can save him from the impending darkness.

"Alistar looks at me. There's something in his eyes now. I've seen it before: something huge and ravenous, like a black beast waiting to be unleashed."

To be together the boys will have to fight their parents, the society, the church, time apart, but the biggest battle will be the one against their worse fears and nightmares. Will they be on the winning side? Buy the book and find out.

The author is one of those "sadists" who like to mess with our heads- giving us just enough information to keep us second-guessing everything and leaving some answers to our imagination which might bother some readers, together with religion/faith also being an important element of the story and a HFN ending. There were some loopholes and things which, had they been done a bit differently, could have made this a perfect read, but I fell in love with the characters and enjoyed it nonetheless.

This is not your ordinary mm romance and therefore I don't think it's for everyone. I would recommend it to mm fans of dark reads who want a well-written, unique and thought-provoking story.

"His words are a clean blade stabbing quickly and neatly through my heart. I barely feel the injury, but the cut is deep and permanent nonetheless. Whatever comes now, I'll wear those three words he's just spoken to me like a scar."

Note to myself: Must read more books by this author!

Purple
Posted by PurpleBook at 3:56 PM