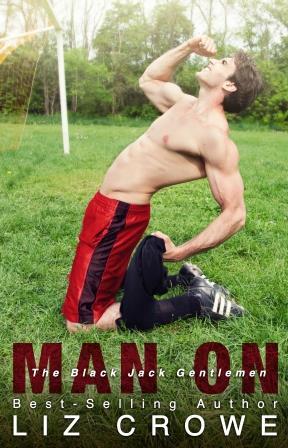 Bad boy of European football, Nicolas Garza is about to hit American shores with a vengeance. Signed by the Detroit Black Jack Gentlemen as lynch pin for their expansion club, Nicco only half believes he’s making the right move. But with a past full of ghosts and rotten behavior chasing him from his homeland, he has no real choice.

Parker Rollings is a college soccer superstar, but his parents’ plans for their only son do not include professional athletics. When the Black Jacks approach him to finalize their roster, Parker leaps at the chance to keep playing, leaving behind medical school, stability and his first and only college sweetheart.

Nicco and Parker face off as bitter rivals for a coveted starting spot at midfield and are forced to channel their negative energy into something positive for the sake of the group—and themselves.

All eyes are on the fledgling team in its debut season. It’s crucial that the Black Jacks prove all the doubters wrong. They must make a good showing in the league and with new fans. But player drama, club dynamics, and misplaced priorities may tear it apart before it even begins.

Somehow, when it comes to arcs from Netgalley, I had more luck with mm romance reads than fm so far, but sadly, this book was one of the exceptions.

- I had mixed feelings about one of the protagonists- Nicolas Garza. In my opinion he behaved as a arrogant, uptight, spoiled brat/ man-whore / drama queen since the very beginning and even if he did have some redeeming moments later on, I couldn't warm up to him completely. In comparison to him Parker was more likable despite his insecurities.

- The story was only around 140 pages long, but there was so much unnecessary "high school level" drama that got on my nerves.

- The book is written from three points of views: Nicco's, Parker's and Rafe's, who was their temporary coach. I really didn't understand through the whole story the importance of Rafe's POV. I think it was totally unnecessary and his marriage struggles which had nothing to do with the main couple only added to the drama.

- Add to that the rushed and abrupt ending which left many questions and situations to our imagination. I thought I was missing pages. Up til' this point I was undecided whether to rate it 2.5 or 3 stars, but the anticlimatic ending with loopholes decided it for me.

There were some good moments in the story too, but for me they eventually became overshadowed by the reasons mentioned above. I'm sure that there will be readers who will enjoy it more than I did. Considering all the great mm romance books I've read so far, this is a 2.5 stars for me.

Purple
Posted by PurpleBook at 4:16 PM