"Nalini Singh dives into a world torn apart by a powerful race with phenomenal powers of the mind-and none of the heart.

In a world that denies emotions, where the ruling Psy punish any sign of desire, Sascha Duncan must conceal the feelings that brand her as flawed. To reveal them would be to sentence herself to the horror of "rehabilitation" - the complete psychic erasure of everything she ever was...

Both human and animal, Lucas Hunter is a changeling hungry for the very sensations the Psy disdain. After centuries of uneasy coexistence, these two races are now on the verge of war over the brutal murders of several changeling women. Lucas is determined to find the Psy killer who butchered his packmate, and Sascha is his ticket into their closely guarded society. But he soon discovers that this ice-cold Psy is very capable of passion - and that the animal in him is fascinated by her. Caught between their conflicting worlds, Lucas and Sascha must remain bound to their identities - or sacrifice everything for a taste of darkest temptation..."

Slave to Sensation was one of my first paranormal books back in the 2010. At that time I gave it 3 stars and wrote these lines:

"Not bad, I like the idea, but it's not what I was looking for. Even so, I was quite amazed. The only thing that bothers me is the title. The author could have found a better one."

And here I am. Read it, loved it, and so damn happy about it!

I think the reason I didn't enjoy it before is because it has a lot of sci-fi. I didn't even want to get into touching disatance with anything sci-fi. I just disliked it very much, but still took a chance on this book.

Now, the world of Psy, together with the changelings, was probably the aspect of this book I liked most. Now, my taste didn't turn to sci-fi in these 3 years, I just learned to appreciate more the world building and the creativity of it. I began to value it more in the paranormal books. What defines pnr books more then the kind of world where they happen?

I may even sound a little weird: shapeshifters -so in tune with nature and led by emotions and the Psy - completely void of emotions; cold and simple, dependent on technology, everyone connected on a psychic level, something like computers in real life, and with some strange abilities. It's like a contrast - nature and technology, emotion and stoicism. Amazing and fascinating! Bravo for Nalini Singh!

So, the characters. I completely, absolutely loved Lucas and Sascha! Their romance seems impossible at the beginning because of their difference. But there sometimes, people may not be so different, maybe that difference was forced on them - like on Sasha. She's in truth a very sensual and beautiful creature and she was made believe that she's weak, defective, and she had to hide her true personality afraid she would get brainwashed. It was a fight for survival, every day. And then Lucas Hunter came and showed her that she is not defective - she is one of the strongest and kindest women out there.

It was a crime against life and the right to be who you are. It was a hard road and I often found myself very sad, not to mention that Lucas was very mad, but he was perfect with her. One moment my gut is clenching with sympathy and the other - with the beauty of them and how possessive and caring Lucas was. I think I don't even have to say that the steamy scenes were amazing considering the hero is an alpha leopard/panther. Oh my ;D

“Sometimes I remember that I can't always protect those I love." Under his fingers, her hair was soft and silky.
She didn't try to tell him that he wasn't God, that he couldn't protect everyone. He knew that. But knowing and believing were two different things. What she did say succeeded in stopping his heart.
"I wish you'd love me."
Why?"
Because then maybe you could protect me, too" Haunting sorrow whispered through her tone.”

Eventually Sascha realized and came to accept the disaster and the wrongness the Counsil and the Silence created when they killed emotion in Psy. And probably even reduced their potential because Sasha is anything but weak, there was something beautiful hiding inside her.

Nothing would've changed if there hadn't been Lucas Hunter - the alpha of the leopard Pack DarkRiver and everything a true alpha should be - strong, possessive, protecting, a ruling hand but a kind and smart leader. I just loved him to bits!

Lucas senses something different when he meets Sasha, the animal inside driving him to to find out what is so unique about her. But her had to be careful, because she was Psy, the enemy, and plus - there was a Psy serial killer brutally murdering changeling women. One of the victim was one of DarkRiver Pack and it was a big loss to Lucas as the alpha. The mystery was interesting too. But since I already read the book before and knew who the killer is, it wasn't a big thing to me now.

When I finished the book, this was me during the whole day:

One thing I just HAVE to mention! A wolf pack - the SnowDancer, had a side role in this book and I just totally fell in love with the alpha - Hawke. My God, that alpha sounds so delicious and I'm desperate to read his book witch is unfortunately the 10th one. How will I survive until then???

So there you have it, a rich world with one unlikely beautiful romance, a mystery of crime and a promise of much, much more from the world of Nalini Sighn.

Lucky for me, there are 11 more books to read 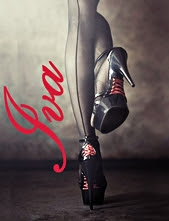