The Siren (The Original Series, #1) by Tiffany Reisz 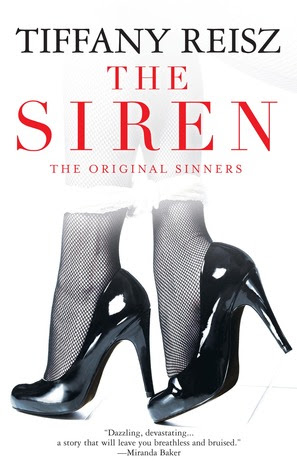 About The Author:
Tiffany Reisz Official
Tiffany Reiz on Goodreads
On Twitter

Summary on the GOODREADS:

Notorious Nora Sutherlin is famous for her delicious works of erotica, each one more popular with readers than the last. But her latest manuscript is different—more serious, more personal—and she's sure it'll be her breakout book...if it ever sees the light of day.Zachary Easton holds Nora's fate in his well-manicured hands. The demanding British editor agrees to handle the book on one condition: he wants complete control. Nora must rewrite the entire novel to his exacting standards—in six weeks—or it's no deal.Nora's grueling writing sessions with Zach are draining…and shockingly arousing. And a dangerous former lover has her wondering which is more torturous—staying away from him...or returning to his bed?Nora thought she knew everything about being pushed to your limits. But in a world where passion is pain, nothing is ever that simple.

"Broken love is the most dangerous love.It will slice you open with every touch ."

This was probably the hardest review for me to write, because this book wasn't like anything I've  read before, and even now after I finished reading it, I struggle with words to describe it. If someone had  told me about the plot, I would have probably given up reading it right away, because I usually avoid books with such dark themes. I read the blurb on GR, but I assure you that it wasn't helpful at all, because the book turned out to be everything I didn't expect and even more. I have so many “issues” concerning the plot that you would probably think that I couldn't possibly like it, but this is one of those books which wouldn't be that good if it didn't have those “issues” and without them it definitely wouldn't leave such an impression on the reader. But still, the biggest reason this book is so good, IMO, it’s the amazing writing style and imagination of the author- Tiffany Reisz, you have my deepest respect !


This book deals with really dark themes (violence, abuse, pedophilia, abortion, heavy BDSM, religion issues etc.) and tells a story about UTTERLY fucked-up characters in an utterly fucked-up environment, but thanks to the author it’s such a beautifully written story that readers like me who don’t usually read books like this, can’t stay indifferent. It is literally a mindf*uck. It will made you question everyone and everything you thought you knew and it will keep you guessing til the very end. It differs from any other erotica I’ve read, because it doesn't even have that much sex scenes for such a long book and while these scenes present an important part to understand the plot and the characters, the good thing is that they don’t define the book itself. Also- BIG WARNING to all of you readers who are hopeless romantics and who like it cheesy and vanilla :)- THIS BOOK DOESN'T DO VANILLA!!!


BDSM, especially HBDSM is not my thing, it is actually one of the things that made me feel really uncomfortable while reading this book and in any other, let’s say, regular erotica (where there’s more emphasis on the sex part than the story) it would scare me away, but, as I said before, this author really knows her job. Every part of the story is amazingly put together and explained that all of us who are not quite vanilla, but definitely far from HBDSM  understand why the things are the way they are, but there were also some more “innocent” steamy scenes, which made it all better.

Some readers had problem with the way book ended, but I didn’t. I suspected smth like that and I was glad because of some of the things (Zach, Wes etc.), even though, I’m still in the dark concerning Nora and others and I’m hoping that those things will become clearer in the next book. The title “THE SIREN is perfect for this book, because the book itself, IMO, is like a siren who “sings” to us readers about taboo themes which people usually don't wanna hear about, but when you start reading it, it starts “seducing” you just like a siren with its seductive and provocative voice that you just can’t stop reading until you finish it and find out her deepest and darkest secrets.
Highly recommend it to everyone who likes dark reads. This book will ruin you for your every next book, I promise.

Posted by PurpleBook at 5:05 PM