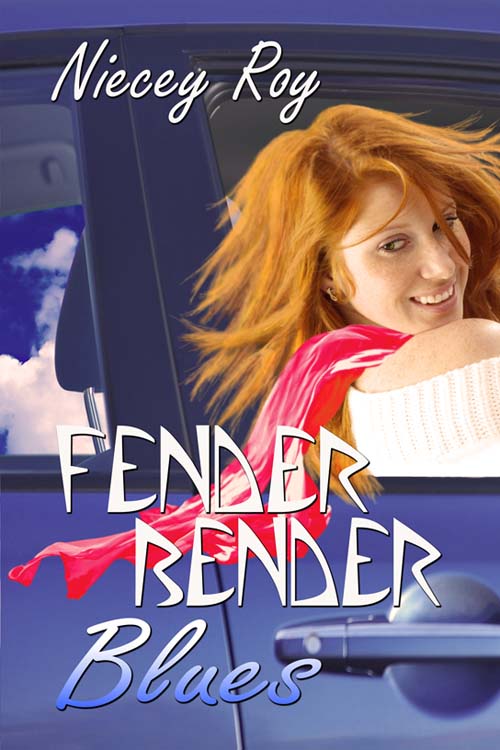 
"Her life took a wrong turn. He's driven by success. They didn't count on crashing into love...


Rachel Bennett loved her job until the day she finds herself doubting her choices.  Now she's hunting for a new career, but starting over isn't easy.  Her plan is simple—no distractions until she finds her dream job.  She didn't plan on fate throwing her a curveball in the form of a fender bender with a sexy guy in an expensive suit.


Craig Larsen is a wealthy, successful business owner with a plan of his own: survive his current PR nightmare and stay away from his overly determined ex-girlfriend.  His need for control and personal success is turned upside down when he meets Rach, a sassy redhead who can't drive.


Soon they find themselves battling with Rach's grumpy old neighbor, toilet-papering the trees of a high school nemesis, and fighting over the last slice of pizza.  Can two very different people plus one fender bender equal a chance at forever?"

“Now what?”
“Nothing.”Rach sniffed.
Craig shifted to eye her warily. “Since when do you answer me with single words?”
“Since I decided I’m not talking to you,” she answered with a shrug, crumpling up the white paper wrapper from her sub.
Craig leaned his face in close to her neck and enjoyed the startled jerk of her shoulders. Her eyes opened wide in surprise. His breath shifted a few strands of hair at the nape of her neck as he whispered, “Why, because you want me?”
“You’re incorrigible,” she said, breathless, her cheeks flushed.
She’s enjoying this. The thought pleased him. Rach was on her back beside him now, her eyes closed. He glanced around the park to see if anyone was watching. No one was. He could swoop in for a kiss and no one would catch him. No one would care, he told himself. She won’t mind…
“I can feel you staring.”
Craig smiled down at her. “So what.”
She peeked at him with one green eye. “So stop it.”
“And if I don’t?” Maybe she’d tackle him, push him down on the blanket and…
She didn’t. She promptly closed her eye and went back to pretending indifference. “I’ll hit you, that’s what.”
“Not if I do this, you won’t.”
He’d only meant it to be a short kiss, but the pleasure of touching his lips to hers kept him there longer. Her tongue was velvet soft and warm against his and the slow mating of their mouths quickened his heartbeat even as he told himself, It’s no big deal, just a kiss.
She nipped his bottom lip and sent heat sliding through his body. The woman could kiss.
She whispered soft against his lips, “Now why don’t you admit that it’s you who wants me.”

Today we have two giveaways for you! First one is tour wide - Jannice is giving away, a grand prize of a $15 Amazon or B&N Gift Cert. Winner will be selected by Rafflecopter. Second is e-copy of Fender Bender Blues for one lucky follower of our blog. All you have to do is leave a comment with your e-mail address until March 1st.
a Rafflecopter giveaway Tour schedule