Review: THE CONFESSIONS: An Original Sinners Collection by Tiffany Reisz 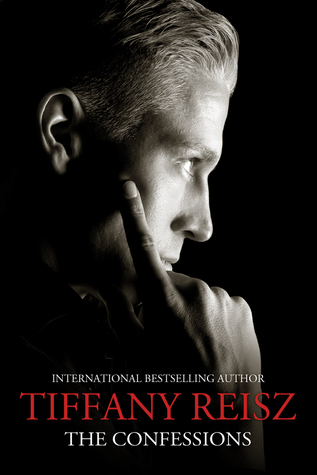 Three Sinners. Three confessions. And all the dirty little secrets you could possibly desire...

Father Stuart Ballard has been Marcus Stearns' confessor since the young Jesuit was only eighteen years old. He thought he'd heard every sin the boy had to confess until Marcus uttered those three fateful words: "I met Eleanor."

So begins the 40-page "The Confession of Marcus Stearns," a moving coda to the RITA Award-winning Original Sinners series. Originally published as a limited-edition paperback for the 2014 RT Booklovers' Convention, and available worldwide for the first time.

This collection also includes "The Confession of Eleanor Schreiber," a companion 36-page story written exclusively for The Confessions.

And, finally, all secrets are revealed in "The Confession of Tiffany Reisz," an exclusive, in-depth interview.

If I were asked to name my favorite book, I'd say it was impossible to only pick one. But naming my favorite series, well, that's another story. It's The Original Sinners, without a doubt. Yet, sometimes I forget how much I loved ignoring the world and focusing all my attention on these Sinners. It's fortunate that Tiffany Reisz still likes writing about them, so even if the series technically ended in 2015, I haven't had to say a real goodbye to it. Nor do I want to. I know in 2015 I naively thought I was ready for the series to come to an end, but I now know differently. That's why reading the third confession in this collection gave me hope there would be new Original Sinners stories, perhaps even novels. Whether they'll be about the same characters or about the next generation, I don't care. I just want more.


I've had this collection for a while now, saving it for a time when I could give it my full attention. After reading The Red, when that OS nostalgia kicked in, I knew it was time to read it. Now, because of those two books, I'm reading The Siren for the third time, and loving it. There are books I read a while ago, that I don't think would be as much to my liking as they were in the past, but The Siren isn't one of them. If anything, it's even better now than when I read it back in 2013. Oh, 2013, the year I read The Siren for the first time and went to Goodreads to rate it. I debated between 4 and 5 stars, and it was like Søren was looking over my shoulder warning me to choose carefully. I went with 5, just to rid myself of that unnerving feeling. Reading the fun facts about Søren reminded me of this; the one where he made Tiffany change the ending of The Siren, to be exact.


What's also mentioned in the interview is that Kingsley was supposed to be only a minor character in the series. I already knew this, but, damn, it made me shudder with horror all the same. The Original Sinners without the King? No, I will not entertain that thought for a second. Whatever happened to give Kingsley his rightful part in the books, I'm grateful for it.

Those were just a few things that came up in the interview with Tiffany Reisz. There was much more, and I enjoyed the discussion about the series and the characters.

Now, the characters in The Confessions: Søren, Nora, and Father Ballard who heard their confessions. It was good to meet Father Ballard. He was an incredibly open-minded priest. I loved both him and reading about Søren and Nora from his perspective.


The topic of Søren's confession was more or less familiar: Eleanor. They'd just met, and Søren was...conflicted? He was sexually pursued by a sixteen-year-old girl. Sounds funny, and so very Nora. What I took from this story, though, were some bits and pieces about Søren's past I hadn't known. So many books later, and there's still so much to learn about him. I like how it let me understand him more, and his actions, but I also kind of hated it for that same reason. I much prefer being pissed at him. That is why one of the reasons I liked Ballard was that he gave Søren a hard time.

Nora's confession came many years after Søren's. I didn't know what hers would be about, and even if I had tried to guess, this wouldn't have been it. I was surprised, but at the same time, it made sense. Her confession would be a good read for those who, because of Nora, have had their reservations about Grace and Søren having Fionn. She confessed her feelings about that and some other things to Father Ballard. He made an accurate statement: Nora and Søren have a complicated relationship with Zach and Grace, and Nora made another: that was the understatement of the century.


After reading all eight novels, all the novellas, and almost all of the short stories, I can safely say I like these shorter works almost as much as the long ones. In the novels there was so much going on and fast, which made them unputdownable. In rushing to find out what had happened next, it was easy to miss some little things. The novellas and short stories had a slower pace. In them the characters were either having kinky fun, or discussing some important events in their lives, but mostly both. Reading these extra stories was quite helpful in getting to know the Sinners better, especially at the time when not even all the Red Years books were out. I've always gotten more than I expected from these stories. I'm keeping my fingers crossed Tiffany Reisz never stops writing them.