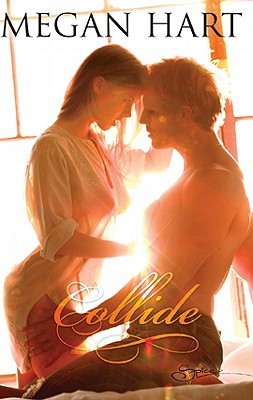 A childhood accident left Emmaline vulnerable to disturbing fugue states that last only minutes, but feel like an eternity. The blackouts are unsettling but manageable …until she meets Johnny Dellasandro.

The reclusive painter gained notoriety in the '70s for his debauched lifestyle and raunchy art films. His naked body has achieved cult status, especially in Emm's mind —she's obsessed with the man, who's grown even sexier with age. Today Johnny shuns the spotlight and Emm in particular… until she falls into a fugue on his doorstep.

In that moment she's transported back thirty years, crashing a party at Johnny's place in his wild-man heyday— the night is a blur of flesh and heat that lingers on her skin long after she's woken to the present.

Nothing scarier than getting to the last third of Megan Hart's book, and reading that the main characters are just fine.

As I've already said a thousand times, I am a huge Megan Hart fan. For good reason. With her books, it's not a question whether or not I'll like the book, but how much I'll like it. Collide is one of those I really liked.

This is Emmaline's story. Emm is a new resident in Harrisburg, a familiar place in Hart's novels. A lot of her fictional characters live there and cross paths with whoever it is I'm reading about at the time. I love those cameos, but back to Emm. When she was a child she suffered an accident which left her vulnerable to fugue states. In reality she'd black out while in her mind she was experiencing something else. At thirty-two, after being free from fugue states for a longer time, she's finally living independently. New town, new job, new friend, and then a new crush: Johnny Dellasandro.

Johnny is an artist and an art gallery owner who likes to keep to himself, but in the seventies he was a famous movie star with a famous body often on display in his films. Jen, Emm's friend, is already a fan who knows a lot about him. Emm becomes one soon afterwards. She's attracted to and intrigued by him. Her internet searches become more Johnny-oriented, as do her film choices. She became a bit obsessed by him, I'd say. Well, more than a bit, actually. I found it a little odd, her sudden intense interest in him. But, I went along with it in the hopes it would all make sense after a while.

Crossing paths with Johnny has another effect on Emm -- her fugues return, and this time in all of them he's there. The young Johnny with whom Emm is more free, more brave, and who is more into Emm than the present Johnny seems to be. Though she has more luck with the dream Johnny than the real one, she wasn't giving up until she wore him down, so to speak. At that time, I still had my doubts about this couple. They were one big question mark. There was just something not quite clear.

All my questions flew out of my head when I was two thirds into the book, and Emm said everything was fine. It was a terrifying sentence. This is Megan Hart we're talking about: creator of worlds, destroyer of worlds. Up until that point I took my time reading Collide, but that sentence freaked me out so much that I read and I read until I got to the end. Sure, it was five o'clock in the morning when I finished reading it, but at least I was able to sleep in peace afterwards. That was the part where it all clicked into place. Everything that didn't make a lot of sense, everything I found weird, I saw in a new light, and I understood.

This is one of Megan Hart's paranormal romances. Truth be told, the romance was a lot more important to me than the paranormal aspect of the story. I didn't want to overthink the paranormal stuff. You could say I adopted the heroine's take on what was happening: None of this made sense, yet it made perfect sense. All I had to do was suspend my disbelief. So I did, because in the end I all cared about was that Emm and Johnny got an ending belonging in a romance novel.