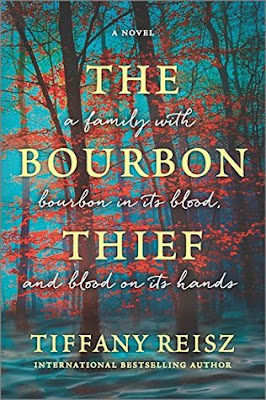 From the internationally celebrated author of the Original Sinners series comes a brand-new tale of betrayal, revenge and a family scandal that bore a 150-year-old mystery

When Cooper McQueen wakes up from a night with a beautiful stranger, it's to discover he's been robbed. The only item stolen—a million-dollar bottle of bourbon. The thief, a mysterious woman named Paris, claims the bottle is rightfully hers. After all, the label itself says it's property of the Maddox family who owned and operated Red Thread Bourbon distillery since the last days of the Civil War until the company went out of business for reasons no one knows… No one except Paris.

In the small hours of a Louisville morning, Paris unspools the lurid tale of Tamara Maddox, heiress to the distillery that became an empire. But the family tree is rooted in tainted soil and has borne rotten fruit. Theirs is a legacy of wealth and power, but also of lies, secrets and sins of omission. The Maddoxes have bourbon in their blood—and blood in their bourbon. Why Paris wants the bottle of Red Thread remains a secret until the truth of her identity is at last revealed, and the century-old vengeance Tamara vowed against her family can finally be completed.
**Add on Goodreads**

A story was born when a girl with a red thread in her hair was raped and sold.

Storytelling is most definitely Tiffany Reisz’s strongest suit. I was completely captivated with the story. The first chapter was nothing special honestly (exactly what the blurb says), but then the story of Tamara Maddox begins and you are under its spell. Around 20% mark was the big shock, I was honestly stunned, but then I remembered - this is Tiffany Reisz after all, you should expect something twisted.

Her body was his body. His body was hers. He saw himself through her eyes—older, bigger, beautiful to her in that strange way girls found men beautiful, and knowing things she wanted to know. She envied him his freedom, that he was a man and could do anything he wanted to anyone he wanted, while she had to marry him to escape the prison of her life and the prison of the world’s expectations.

The story is a times heavy and tragic, but there are these comic moments which prevent it from being too dark. And there is of course the hot, passionate and forbidden love story between Tamara and Levi. (*swoon*)

The story itself had me turning pages like crazy… but at the same time, there is this undertone of, I don’t know how to put it.. Nostalgia, maybe? Like you’re reminiscing about that amazing Summer you had 5 years ago and can never have back. That’s how I felt about Tamara & Levi, I loved them, I was drinking up every minute of their story, but all the while thinking it can’t last, I feel like something is going to happen... Now, of course I’m not going to reveal anything, that’s just the feeling I had, and I loved the way Reisz structured the story. I like when I don’t know if the story would end happily or not.

Furthermore, if you’re already a fan of Tiffany Reisz you know you can expect that she’ll rip out your heart a little, mesmerize you with the story, shock, disturb, and make you question. And if you’re not, well then you have some idea as to what to expect.

In conclusion, The Bourbon Thief is the story of revenge, passionate love and one cursed family and it’s definitely one of my favorite books of 2016!

One of these days you’re going to get what you want and it’ll be the last thing you want.