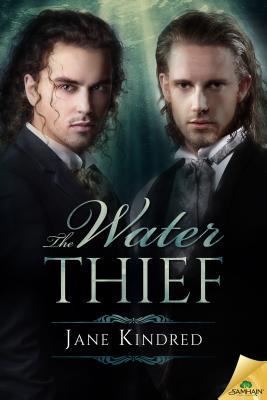 It takes a con to expose a con. But this con could strip their secrets bare.

Framed for his twin sister’s murder, Sebastian Swift has been kept drugged in a mental institution since age thirteen, aware of only one horrible fact—every night in his dreams, he drowns.

After a freak storm frees him, Sebastian learns the truth. His guardian, Emrys, has been siphoning off his inherited magical power over the waters of Cantre’r Gwaelod—one gruesome vial at a time. And the man’s bastard son, Macsen, has been raised in his place. Determined to find his twin’s killer, Sebastian assumes her identity.

Macsen Finch isn’t about to give up his guise as the young earl—and not just because of the fortune. His cousin’s return from the dead threatens Macsen’s own efforts to undermine his father’s evil plan. Yet he can’t deny his inexplicable attraction to the imposter.

Acting on their mutual desire puts them both at the mercy of a madman’s wrath. To stop Emrys from stealing his power, Sebastian will have to learn how to use it—and whom he can trust.


This was my second time reading Jane Kindred. Truth be told, had this book not already been on my NetGalley shelf when I finished The Lost Coast, I would've stopped at one.

The Water Thief was better for me than The Lost Coast, but I think this author's works and I aren't a right match. Kindred obviously has many ideas, which I appreciate, but the execution of those ideas unfortunately doesn't work for me. Even so, there was something about this story that I can't quite put my finger on that kept me reading to see what happened next.

Just like with The Lost Coast I had trouble determining the genre of this book; it's got paranormal elements, for sure, it's also historical, and contemporary, I think, then it's erotica and romance, too. I think. What all of that combined makes I can't say. Hey, it's M/M -- this I can say with certainty.

The story starts with the main character Sebastian escaping the asylum he was being kept in for years under his evil guardian's orders. He did so with the guidance of the ghost of his late twin sister, and was led to a group of thieves who took him in. A little while later, together they devised a plan to have Sebastian disguise himself as his sister August and claim her place in the family and the realm. That put him once again in danger from his guardian who had been stealing Sebastian's power over water any chance he got. It also put him in the way of Macsen, who for years had assumed Sebastian's identity.

From there on Sebastian slowly found out the truth about his powers, his history, the truth about what really happened to August, and about that entire realm. Also, Sebastian and Macsen grew more and more attracted to each other.

A lot happened in this novel. The author had many ideas that could've made this a very interesting read, but the execution missed the mark for me. For a paranormal story, this book didn't offer much information about the world it was set in. The explanations about the realms weren't enough for me to get the full picture, and most of all I was confused as to what time the story was set in. The questions Where is this? and When is this? kept popping up in my mind.

That lack of world building was one thing that bothered me here. The other would be Sebastian. The novel has both Sebastian's and Macsen's perspectives, and while Macsen's is written in third person, Sebastian's is written in first, and it takes up a bigger chunk of the book, and yet, his character didn't leave much of an impression. It hasn't been long since I finished reading The Water Thief, but words that aren't "naive" don't come to mind to describe its main character. I have a higher opinion of Macsen, given his past and present. I guess the book's named after him for a reason.

So, with a confusing plot and setting, and only one character I somewhat cared about, I wouldn't label this a great read, but it kept my interest enough not to give up, so I can say it was okay, but that's it.