Review: THE QUEEN (The Original Sinners, #8) by Tiffany Reisz 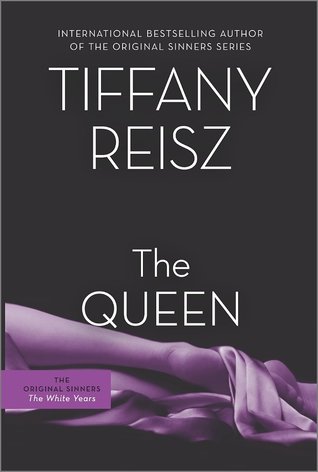 Once upon a time, Nora and Søren made a fateful deal—if he gave her everything, she would give him forever.

The time has finally come to keep their promises.

While new lovers and the sweet taste of freedom intoxicate Nora, she is tempted time and time again by Søren, her only love and the one man who refuses to bow to her. But when Søren accepts a new church assignment in a dangerous country, she must make an agonizing choice—will the queen keep her throne and let her lover go, or trade in her crown for Søren's collar?

With a shattering final confession, the last link in the chain is forged in The Original Sinners saga. It's the closing chapter in a story of salvation, sacrifice and the multitude of scars we collect in the name of ecstasy—and love.

Book eight. The end. This is the moment I've been both dreading and looking forward to for a long time. I hate having to say goodbye to another series this year, especially one with so many characters who've become dear to me over the few years I've been reading about them, but it's time. I'll miss the series, I'll miss the Sinners, I already miss Kingsley, but it's time to let them put the past behind and enjoy their happy endings. That's what The White Years have been about. Each book showed us the main characters living happily, giving us info on what's new in their lives, and what's to come, and in between we had a few hundred pages of confessions about times long gone. This, the last confession was Nora's.


Both in the present and the past The Queen picked up right where The Virgin left off: in their present time the big wedding was happening, and Nora was delighted; in the past she was sitting in Kingsley's office, and her life was about to change forever. When you like a series as much as I like The Original Sinners, in the anticipation of a new book, you can't help but imagine what will happen in it based on the bits and pieces you know about it. Sometimes your imagination goes overboard, so when you actually read the story, you're surprised by how simple it all was. That's sort of what happened to me here. It's not a bad thing. Just different. I liked the addition of Thorny and Milady, one there to help and the other to hinder Nora's future as a Dominatrix, though I did think they would be the cause of bigger drama.


The Queen gave us insight into how Eleanor/Elle became Nora, how she trained to be a dominant, then later in the book how her life was going working for Kingsley, but if I had to pick one aspect of the story that stood out to me, it would the complicated relationship between Nora and Søren, and how hard it was for her to not come back to him. Having the freedom to do anything and anyone felt amazing to Nora, but there was always Søren tempting her to go back in his cage. Always Søren. Even I felt emotionally exhausted. I used to think this would be a Nora book, but given all the scenes with her and Søren, especially the end, I'm calling this a Nora & Søren book.


As I mentioned at the beginning, I've spent some time thinking about what I might read in The Queen. I thought it would be cool to have it end at the point where The Siren started. That didn't happen, but it was close enough. The cause of Søren's unusual nervousness, this I nailed. But of course, a few parts I could never have guessed. And the end, the very end, ah, it was so happy it brought tears to my eyes.


In the end, just a few thoughts about The Original Sinners. I've enjoyed reading each and every part of the series, be it a full-length novel, novella or a short story. However, I do have to admit that while I've loved reading the tales from the Sinners' past, both unknown, and the ones we heard about before, I loved The Red Years more. In The White Years I missed having those different POVs (The King excluded; Kingsley's POV only was a dream come true!), when one or more of them were of the characters outside that main group, and learning new information about the Sinners through the eyes of people who were, like me, only getting to know them. It was a magical time, getting to know Nora, Søren, Griffin, Michael, Zach, and others and learning about all the ties that bind them. The best was, of course, getting to know Kingsley. That man, I will miss reading about him so much...

I don't know what else to say at the moment, except if you haven't already, pick up The Siren, and as Goodreads says: "Meet your next favorite book."