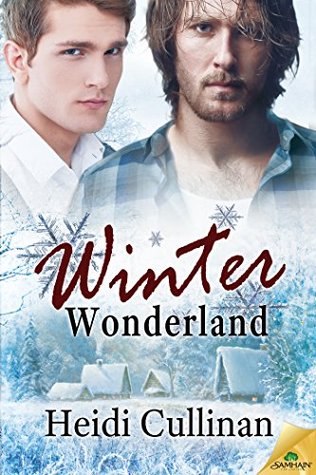 
Finding Mr. Right can be a snow lot of fun.

Paul Jansen was the only one of his friends who wanted a relationship. Naturally, he’s the last single man standing. No gay man within a fifty-mile radius wants more than casual sex.No one, that is, except too-young, too-twinky Kyle Parks, who sends him suggestive texts and leaves X-rated snow sculptures on his front porch.

Kyle is tired of being the town’s resident Peter Pan. He’s twenty-five, not ten, and despite his effeminate appearance, he’s nothing but the boss in bed. He’s loved Paul since forever, and this Christmas, since they’re both working on the Winter Wonderland festival, he might finally get his chance for a holiday romance.

But Paul comes with baggage. His ultra-conservative family wants him paired up with a woman, not a man with Logan’s rainbow connection. When their anti-LGBT crusade spills beyond managing Paul’s love life and threatens the holiday festival, Kyle and Paul must fight for everyone’s happily ever after, including their own.


This is the third book in the Minnesota Christmas series, which means before it was finally Paul's turn to find his significant other, two other couples found their happily-ever-afters. Those who have read and liked the previous books will be happy to see them here too. I haven't read them yet, but I was glad they were part of the story, though for me it was because they were Paul's friends, and Paul needed friends in his life, and because they were very good friends who helped him find love where he least expected it.


Winter Wonderland had many good points. Some of them were listed in the "warning", some were related to showing love for a certain animated film I love, and mocking a demographic that likes to watch a certain news program that I like to mock, and Winter Wonderland sounded like a magical place I wanted to visit, but the best thing about this book were the characters. Aside from a few unsavory characters, I had plenty of lovely ones to enjoy reading about. I loved both main characters, Paul and Kyle, and I liked having POVs of both of them. I liked them both, but they won me over in different ways. Paul, with his loneliness, love for cheesy Christmas movies, a family who put him down every chance they got, and wishing for his one to finally appear, had an air of sadness around him. I wanted to make it all better for him, but obviously couldn't, so I wished for a white knight to come and do it. And you know what, he did. Kyle may have been the last person Paul saw himself with, but he proved to be a perfect match, and a knight who'd not let him run away from love and happiness, who'd make his days brighter, and nights hotter, and fight monsters that were Paul's family members for him. In short, Kyle was the man who made the future something to look forward to, and with Kyle, and a new family who loves and respects him, many happy days are in front of him. I can stop worrying about him. :)


I knew I picked the right book to read when I came across this: A ten-foot-tall snow penis towered over Paul Jansen’s front steps. This sentence you probably had to read twice to make sure you read it right the first time is the book's opening line, so, you know, it didn't take me long. I was hooked from the get-go. It is the talented artist responsible for those imaginative, lifelike sculptures that for me was the best part of the story. The artist was Kyle, of course, and if Paul had sadness written all over, Kyle was like a ray of sunshine, making everyone around him smile, and feel warm, sometimes with knitwear. I adored him. His relationship with Paul, his family, especially his sister, Paul's neighbor Edna, and really everyone around him was so wonderful. Ah, he was a treasure. Add to all that his domineering, controlling personality that comes out to play in the bedroom, and you have a perfect boyfriend material for Paul.


Paul & Kyle's relationship had its ups and downs as any other, but mostly it was sweet, sweet and hot. The story had parts I liked less than other parts as any other story, but overall it was a very enjoyable holiday read. But what's most important in this is:

At last, Paul had a boyfriend for Christmas he had been wishing for...