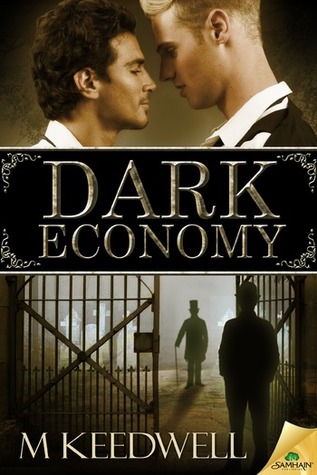 Medical student Cadell Meredith has been known to acquire “volunteers” from the occasional pauper’s grave in order to improve his surgical skills. While the legality of this practice is a bit murky, he wouldn’t go so far as to call it out and out robbery.

His latest acquisition, however, is different. The body on his table was obviously healthy, wealthy—and murdered. Cadell feels compelled to seek justice for the dead man, but while dissection comes naturally to him, crime investigation is unfamiliar territory.

Furthermore, he’s caught the attention of one of those new police officers, Blaine Breton. A handsome, sentimental fool who insists Cadell is a criminal. A criminal! Cadell is the first to admit he’s no saint, but he’s no killer.

A marvelous game of cat and mouse ensues as Cadell seeks to expose the truth while hiding his own secrets. A task that grows ever more difficult as his desire for Breton grows…and the danger deepens.


One of my favorite parts of Samhain Publishing books is that warning that comes at the end of book blurbs. They are always fun to read, and for me not even a warning, but actually a list of things to look forward to in a book. With Dark Economy it was: This story contains mystery, mayhem, and a male romance that starts off in the most delicious way possible—mutual hostility. Awesome warning, right? No surprise, right after I finished the book, the first sentence I wrote was:
A whole lot of mystery, quite a few suspects, and a bit of romance in Dark Economy...


Mystery is rightfully mentioned first as it was what the book was mostly about.


It starts off with the hero Cadell Meredith breaking the law. As a medical student keen on learning as much as he can, he finds his classes rather unsatisfactory in providing him with the knowledge he so desires. Therefore, he's forced to be creative in the ways of learning human anatomy, meaning occasionally acquiring bodies from pauper's graves, which was exactly what he was doing at the beginning of the story, and thus breaking the law. Right then and there we also meet the policeman who will throughout the book be his main adversary as he is an officer with a firm belief practicing on cadavers is an awful practice, which sparked many an argument between them. He will also be the man to wake a part of Cadell he spent years ignoring. But back to the mystery at hand. The body Cadell brought home to dissect did more than offer insight in the intricacies of anatomy, but also in the life and death of the person it used to be. For one, it was apparent the body didn't belong to a pauper, but to a rich young man. Second, the young fellow had clearly been  murdered. That knowledge woke in Cadell the need to investigate. Why he chose to go on the mission of finding out who the man was and what happened to him, he'll ask himself several times without having a definitive answer. He felt he owed it to him, he supposed, for helping him in his medical studies, but over time it became more:

“Kind of funny that you dragged me back to life by dying.”


His investigation required he get help from an old friend who had been at one time more than that, he made new friends, and his path kept crossing with the bloody policeman who occupied this mind until even they made peace with each other, and for all that Cadell was grateful. Which brings me to this: Dark Economy is a story I liked, but (there's always a but) it would've been a story I loved -- the book would've been an easy five-star read -- had a few parts been handled differently. The parts I'm referring to are the ones relating to Cadell's personal life. His love for medicine and his dedication to it was well described. His dedication to his chosen studies and eagerness to put his knowledge into practice was so palpable it made me happy for him for having found a profession he feels that way about. What I would've liked to read more about was his personal relationships, past and present, as that is something that interests me about characters. It was obvious he had issues with his family, and that something happened to drive them apart. Same thing with his friend. His past love life, I thought, deserved more page space. Not to mention his present love life. He and his main love interest had little time together for the majority of the book. They didn't even become lovers until the very end. I knew going in the main focus would be solving the mystery of Treswick's murder, but I had hopes the romance would have a slightly bigger part in the plot. Why this was as it was, I do not know, but since this book seems as one of those stories that could get a sequel or more of them, if it happens, I do hope the attention shifts more to Cadell's private life. All this, of course, is because of my preferences. I do watch crime/investigation TV-shows, and even then, the episodes I enjoy most are the ones that are about cases that are personal to the main characters.

Uncovering Treswick's life and death piece by piece was interesting. In fact, it was so interesting and complicated, I wished he were alive so we could get a book about him -- I think it would've been a good one. Alas, he's swimming with the fishes. However, as much as it was interesting, keeping track of everything and everyone proved to a hard task for me, and more than once I would find myself confused by all the information as there were quite a few suspects (this is something that happens to me while watching criminal investigations in TV-shows as well). Nevertheless, as a whole Dark Economy, Cadell Meredith and Blaine Breton have left a good impression. I look forward to seeing what the author will come up with next!


In the end, I believe Dark Economy would appeal most to mystery lovers who don't mind a tiny bit of M/M romance thrown in the mix. I'll continue hoping M. Keedwell's next book will contain more than a tiny bit of romance. *fingers crossed*