Hell Without You by Ranae Rose 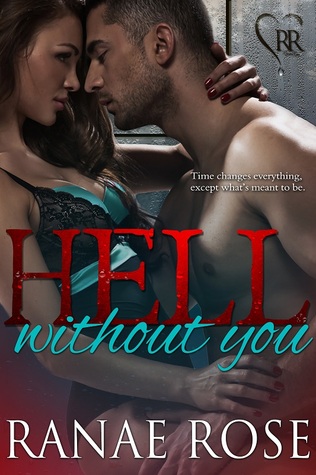 Time changes everything, except what’s meant to be.

Seven years is a long time – long enough to transform Clementine from a small-town teenager with a broken heart into a woman ready to take on the world, but not long enough to make her forget about the man she was never supposed to see again. A temporary return to tiny Willow Heights thrusts her back into Donovan’s life and home, unearthing heartbreak and obsession that have stood the test of time.

He left seven years ago too, for war and other things Clementine can only imagine. Coming back to the town where he grew up in the shadow of poverty and drug addiction makes no sense, and neither do Clementine’s feelings for him. He could never forgive her for leaving, could he? Even if she had no choice.

Now, she has the freedom to choose … and so does he. Every day in Willow Heights makes it clearer: all he ever really wanted was her, and nothing will change that. Not even a taste of the hell that drove them apart in the first place.

I always had a weak spot for emotional romance books with the theme of first love and that's why this one sounded very promising, but unfortunately, in the end, it failed to deliver. When the story doesn't grip you from the start it's very unlikely that it will later on and this was one of those stories. It wasn't awful. I didn't hate it. I was just bored out of my mind and couldn't get into it no matter how hard I tried.

The MCs of this story are Clementine, a rich girl and step-daughter from a well-known politician & Donovan, the poor mechanic living in a trailer, who were each other's first love and both first big heartbreak in the high school. At the beginning of the story we meet them as grown-ups in their late twenties. Their life roads cross again after almost 7 years of having no contact at all and with every next page the present and past events get mixed and we're given clues about which terrible events led to their separation and break-up. Things have changed since the last time they saw each other. They have changed- Clementine graduated on collage and came back to look for a job, while Donovan left military and came back to their hometown in hope to start a new, better life, but the one thing that remained the same are their feelings for each other in spite of huge trust issues from both sides.

Both Donovan's and Clementine's characters felt not developed and interesting enough in my opinion for me to actually to connect with them or their story. The issues they had solved in the most convenient and quickest way which made the story quite monotonous, predictable and uneventful. I was expecting some kind of bigger twist or something like that, but in the end the story felt flat. My Goodreads profile counts over 500 read books and that's probably one of the biggest reasons for this rating. The story needs to be really interesting and unique to hold my interest and that wasn't the case with this one. It was just too much of a light read for my reading preferences.

I believe there will be a lot of romance fans who will find this story endearing and not share my opinion, especially those who don't read as much as I do, but considering the books I've read and rated so far, sorry, but I don't feel  this deserves more than 2 stars. Read it and decide for yourself.

Posted by PurpleBook at 1:58 PM