Love, in English by Karina Halle 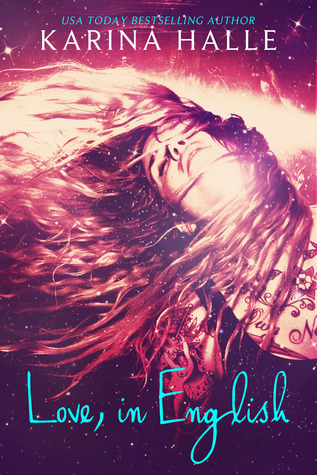 Book summary:
He’s thirty-eight. I’m twenty-three.
He speaks Spanish. I speak English.
He lives in Spain. I live in Canada.
He dresses in thousand-dollar suits. I’m covered in tattoos.
He’s married and has a five-year old daughter. I’m single and can’t commit to anyone or anything.

Until now. Because when they say you can’t choose who you fall in love with, boy ain’t that the f*#king truth.

To a restless dreamer like Vera Miles, it sounded like the experience of a lifetime. Instead of spending her summer interning for her astronomy major, she would fly to Spain where she’d spend a few weeks teaching conversational English to businessmen and women, all while enjoying free room and board at an isolated resort. But while Vera expected to get a tan, meet new people and stuff herself with wine and paella, she never expected to fall in love.

Mateo Casalles is unlike anyone Vera has ever known, let alone anyone she’s usually attracted to. While Vera is a pierced and tatted free spirit with a love for music and freedom, Mateo is a successful businessman from Madrid, all sharp suits and cocky Latino charm. Yet, as the weeks go on, the two grow increasingly close and their relationship changes from purely platonic to something…more.

Something that makes Vera feel alive for the first time.

Something that can never, ever be.

Or so she thinks.

Love, in English on Goodreads

Love, in English was one of the books both Beatrix and I were really looking forward to reading this year. We're both big Karina Halle fans, and we were actually counting down the days 'til we could get our hands on this book and enjoy Halle's new contemporary romance. However, once we did get our copies, and started reading, things didn't go as well as we had hoped. Unfortunately, as you can read from our reviews neither of us ended up liking it.

I've been wrecking my brain over my rating for this book. I kept going from one star to two stars and back. Finally, in honor of that part at the beginning before I started to genuinely dislike both the characters and the story, I've settled for two stars that say that it was okay. Still, the fact remains that I didn't like this book. That kinda makes me sad, for I had such high hopes for it.

But what can you do when you've read a romance novel you've started to dislike the moment the main characters got together... Don't you think that's sad?

Though I am absolutely against adultery, and I knew this had cheating in it, I hoped against hope that it would be handled in such a way that I could stomach it, and actually feel for the characters. I had hope in Karina Halle and her talent. But, my hopes were soon shattered in the hands of Vera, who failed to make me like her or understand her.

As I've said before, whether I like a book or not depends largely on the characters and my opinions and feelings towards them. At times, that is a good thing, but at other times such as this, it is not.

Vera was a character I sort of liked at the beginning. You know, up until the point when she decided it was perfectly OK to sleep with a married man. And after that, every consecutive decision she made and the way she acted just made me like her less and less.

Now that I've mentioned sleeping with married men, I can't not say this: Everyone in the book, well, everyone except Isabel (the wife) and Lauren (who was, I believe, characterized as a slut-shaming feminist), acted as if it really was perfectly OK. In fact, some of them actually encouraged it. I may be crazy, but if someone told me they were in love with a married man, I would say a lot of things, but "Go for it!" would not be one of them. But that's just me.

"I would not let my selfish heart and emotions win."

I sometimes wished Vera would have listened to herself. However, Vera went for it. Oh, she went for it, alright. She did things, made some drastic changes in her life, all to be with Mateo. While I didn't understand the logic behind her behavior, nor did I approve it, I still couldn't believe how she was easily spooked when things got rough. Really, what did she expect? To be perfectly honest, I thought they got away way too easy.

Mateo. Besides being a hot Spanish man, I can't think of anything nice to say about him. I don't really know much about him. When you think about it, that would mean that neither does Vera, but whatever. I know I was supposed to feel sorry for him for being in an unhappy marriage, and you could say that I did, but that wasn't enough for me to justify his behavior.

In the end, the only people I felt sympathy for were Mateo's wife and daughter. They deserved much better.

So, there you have it, folks. I believe when it comes to liking this book, I'm a black sheep, or a black hole. No matter.
I love love in my books. I do. But, I also like when the characters in my books decide to do the right thing. The honorable thing.

Yet another book I was looking forward to that has left me disappointed.

Beatrix's review:
So, I’ve sat down to type this review, and I have no idea where to start. I have so many thoughts..
Love, in English was, well.. a bit disappointing. Why?
The main reason is, the second half of the novel just did not work for me. I found myself sighing and rolling my eyes. Drama, drama and more drama.

I really loved the first part, in the Las Palabras program, I could feel the spirit of Spain, it was really authentic, but then bam - instalove. Just, no.
Okay, I loved Very & Mateo’s connection, I have to say Karina Halle is the queen of sexual tension. Them getting to know each other, the anticipation, I loved it all. But then, when they finally got together, everything went downhill for me. I’m sorry, but I don’t buy the infinite love, the dying without each other, can’t live without you after only knowing each other for a month! Okay, you are in lust, even in love, but there is a big difference between being in love and loving someone. This book was a lot of telling and not showing, in regards of love.

As this is a romance novel, I have to say a few things related to that. Now, this is probably unfair, to compare books, but as both are romance novels, I just have to. The Bronze Horseman, my favorite romance novel of all times! Oh boy, just thinking about it gives me tingles. I will never forget Tatiana & Alexander, their story broke me, I felt it all as if it were happening to me. I could feel their love and pain pouring from the pages. THAT is what I want in my romance novel. Here, a lot of “I love you”s but we don’t really see it, do we?

What we do see is a lot of selfishness and misunderstanding. I went from really liking Vera and connecting with her to being so freaking annoyed! Dear Vera, you just can’t behave like that.
A lack of communication leads to misunderstanding. What she did –SPOILER – leaving him like that, I wanted to knock some sense into her. The fact that she moved to another country didn’t bother me, I would have been skeptical if I hadn’t seen it happen and work in real life, so that was fine. What was not fine, is how it was all handled. I perceived Vera as very immature and childish, and as Mateo is quite temperamental, I see their relationship as a ticking time bomb. I don’t see it working in reality.

Furthermore, the adultery. No one likes it, but I don’t mind reading about it. I wanted to see how it was tackled here. Not satisfactory, to say the least. The ending is completely fairytale-like. And let me tell you, let’s read a book from Isabel Casalles’ point of view and see how she feels. That’s all I‘m saying!

Therefore, I might not always love what Karina Halle writes, but I could never hate it as well. The beginning was promising, and the first part really nice, so that’s why this was worth it.
Though, I have to say, I don’t think this is Halle’s best work, by far. The Artists Trilogy and Experiment in Terror series stay my favorites and I’d recommend those. I guess I like Halle’s books a bit more edgy, action-packed, with more suspense and horror.

In conclusion, to whom I’d recommend this book? To all hopeless romantics and those who don’t mind melodrama. This was just too much for me.

XOXO
Danija & Beatrix
Posted by Dannie at 12:12 AM