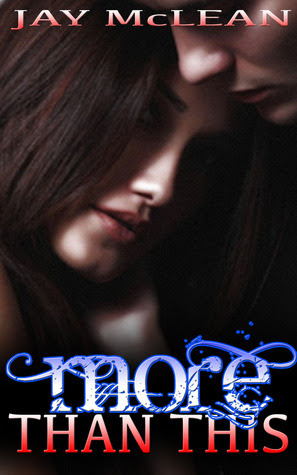 *Mikayla*
In one night my fairytale ended. Or it may have begun. This is my story of friendship and love, heartbreak and desire, and the strength to show weakness.

*Jake*
One night I met a girl. A sad and broken girl, but one more beautiful than any other. She laughed through her sadness, while I loved through her heartbreak.

*This is our story of a maybe ever after.*

"He was right. It made no difference whether it was 6 months or 6 years.
I couldn’t undo what had been done. I couldn’t change the future. I couldn’t even predict it.
It was one night.
One night when everything changed.
It was so much more than just the betrayal.
It was the tragedy. The deaths. The Murders.
But it was also that feeling.
That feeling of falling."
**Mature Reader Advised. Language and Sexual content.**

It's the fucking hardest thing to do,
to be around the person you love,
with everything you have,
and not be able to love them.

I saw this book a lot  lately on GR and all these high ratings, then I read the blurb which was intriguing enough, with a promise of a masochist read, so of course I had to read it. This book will be a special treat for all romantic souls out there who believe that love can overcome everything. It's also a light masochist read. It's a story of Mikayla & Jake, two high school seniors, told from from both their POVs, who meet on their prom night which soon turns to Mikayla's worse nightmare. This is one of those stories which makes you think about life.  You put yourself in the skin of the characters for a moment and ask how would you deal if you ever find yourself in the same situation as them and hope you never find out. How to cope when your own "bubble of happiness" suddenly bursts and you find yourself all on your own?

It's a touching story about loss and grief, about starting fresh from ashes and trying to collect all the broken pieces of your life and find your happiness again. I liked the first half of the story better than the 2nd half. It just felt more real. Mikayla was o.k. for a main female character, meaning she didn't annoy me that much. She definitely dealt better with most of the fucked-up situations she found herself in than I would, especially regarding her first boyfriend and her supposed Bff. Jake was of course perfect like most of the main male book characters, almost too perfect which again made everything unrealistic in my eyes. Their story was sweet, very emotional and romantic, at times even a bit too romantic. It's also a story about breakable and blurry bonds of friendship. Are there real, true, trustworthy friends out there? How come sometimes people who we barely know you turn to be more reliable than your supposed friends?

Unlike Mikayla's friends, I really liked Jake's friends- they were fun and goofy, type of people you would like to be friends with, especially Lucy who like Mikayla was described as a bookaholic like us, always wearing her kindle reader with her with smut reads being her guilty pleasure.
Now a little about the things I didn't quite like: As I already hinted above- the story from time to time felt just surreal. It reminded me too much on why I didn't like high school- too much of unnecessary drama & drama queens, especially in the 2nd half of the book. I had the same issue with Jasinda Wilder's Falling Into Us- there were some issues which solved in the best possible way and in a short amount of time which to me just felt too unrealistic. I like my reads more dark and edgy, but I don't mind from time to time to read something fluffy like this to take a break from more darker books. Too much happiness  and romance makes me itchy and easily bored, lol. I know- disturbing xD. Especially when it comes to the cheesy lines and this story unfortunately wasn't stranger in that department too. And talking about sexual frustration- all that dry humping drove me nuts! Don't get me wrong, it was hot, but after awhile it became annoying, because you just didn't see the point what was stopping them when they did everything else.

All in all, the book didn't blow my mind like the rest of the readers, but I liked it enough to read the next installment in the series. It will be Logan's story- Jake's best friend.

So out there, in the real world,
I don't let myself feel it,
the love I have for him.
Because I really, truly, deeply
love him.
And  I'm scared.
So fucking scared.
That I won't be enough.
And that I'll never really have him.

Posted by PurpleBook at 2:40 PM