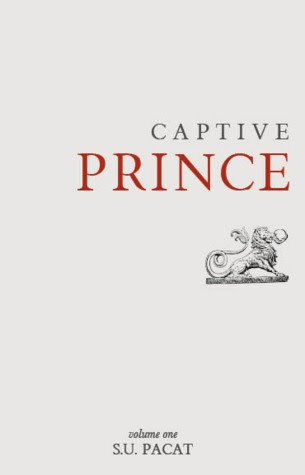 “This was Vere, voluptous and decadent, country of honeyed poison.”
Damen is a warrior hero to his people, and the rightful heir to the throne of Akielos, but when his half brother seizes power, Damen is captured, stripped of his identity, and sent to serve the prince of an enemy nation as a pleasure slave.Beautiful, manipulative and deadly, his new master Prince Laurent epitomizes the worst of the court at Vere. But in the lethal political web of the Verethian court, nothing is at it seems, and when Damen finds himself caught up in a play for the throne, he must work together with Laurent to survive and save his country.For Damen, there is just one rule: never, ever reveal his true identity. Because the one man Damen needs is the one man who has more reasons to hate him than anyone else...


For all fans of the epic TV shows like Spartacus: Blood And Sand, Game Of The Thrones , The Tudors etc. and movies like 300 and The Gladiator meet Captive Prince by S. U. Pacat.
Raw.
Brutal.
Bloody.
Sensual.
A Mindfuck.

All that and more mixed with a beautiful & forbidden love story that will rock your world !

Two sworn enemies.
Two Kingdoms in a constant battle for power.
Two unlikely and unexpected allies.
Lies, secrets and deceives everywhere.
Who's right, who's wrong?
Who's the bad guy and who's only a pawn in their ruthless games?

I was searching for a good m/m book when I came across this one on the Goodreads top list "the best m-m romance book published in 2013" and this one and the the next one in these series are on its 2nd and 3d place which immediately drew my attention, even though I was a bit skeptic at first when I saw the cover which is, no offense, but kind of plain and boring. I mean look at it- it looks more like a cover of some Tv guide or smth and definitely doesn't do justice to this spectacular book. I really hope the author will change it in the near future for smth with more imagination, because I know there are lot of readers out there like me to whom even covers present a pretty important factor when picking out books. I usually think to myself then- if he/she approved this boring picture to be the cover of her/ his book then the book must be nothing special too. Covers are there to draw attention not to withdraw, because they are the 1st thing we readers see, aren't they? Good thing that this time not even the cover could prevent me from reading, because I would really miss out on a great book.
The story is well-written, unique and  compelling from the very beginning. I don't think I ever read smth like this. Right at the beginning we get introduced to this amazing world of 2 kingdoms: Akielos & Vere, their princes and slaves. Their politics is ruthless, based on very strict rules, the king having the last word in everything. Their world is full of secrets, deceives and mysteries which will keep you guessing through the whole book. Prepare to be utterly mind-fucked!

In Akielos, submission was an art,
and the slave was the artisan.

Obey.
Play by the rules.
Kiss the Prince's shoe.
Jump through his hoops.

She touched his jaw, unafraid.
Her finger were slender, white and faultlessly elegant.
"I see why you prefer pale skin,"
she said. "Yours hides the bruising."

"You're a slave.
You're worth nothing."
The slaves in Akielos are trained into submission from their birth for their future masters. They get collared by  their masters with beautiful jewelry and perform in daily shows and fights, basically they do everything to please their masters. There are three types of slaves: pet slaves, pleasure slaves & servants. Pet slaves outrank other slaves, they live in luxury and they submit only to their masters and to the king. The difference between slaves in Akielos and slaves in Vere is that men in Vere only keep and couple with men slaves and women with women slaves and the slaves in Akielos are treated with more respect than in Vere and they are famous for their beauty and submissive art. These two kingdoms and their rulers hate each other since ever and they are in constant war for power, but things are soon to be changed by unexpected case of circumstances.

The main characters of this book are: Damianos, The prince of Akielos & Laurent, The Prince of Vere, both soon to be the kings. I loved both of these characters and they are definitely one of my favorite m/m couples ever, especially Laurent who is without the doubt the most intriguing character of them all. I loved their love-hate relationship which was well more of a hate relationship in this book (but wait until you read the second one), especially their hilarious back and forth bickering which kept me entertained through the whole book. The chemistry between them was smoking hot from the very beginning, but being sworn enemies and all, it will take time, lots of ups and downs, for them to actually do smth about it, so if you are looking for an erotica, this book is very sensual, but the focus is more on the story which was more than fine with me, because the story was amazing. It gets more explicit in that department in the 2nd book.

"I don't think the Prince is in an amorous mode,"
said Damen, neutrally.
" I take a while to warm up,"
said Laurent.

"He asked me to bed you, then report back to him,"
Damen was forthright. "Not in those words."
"And your answer?" "If I'd bedded you, you'd know it."

"So he's tame," said Estienne,
and reached out tentatively,
as though to pat a wild animal.
It was a question of which part of the animal
he was patting. Damen knocked his hand away.
Estienne gave a yelp and snatched
his hand back, nursing it against his chest.

"Not that tame," said Laurent.

The book also deals with some heavy issues like slavery, physical and sexual abuse, pedophilia etc. which wasn't always easy to read, but which definitely made the story more interesting and intriguing to read.
The author published the 1st two books in the series as freebies at first, but no book awesome like this can go unnoticed and recently Penguin bought the whole series. Congratulations to Ms Pacat, you deserved it! There will be three books in the series, two of them already published and the third is scheduled for 2014. I'm totally hooked and have already read the 2nd one which blew my mind and is on my "top reads of 2013" shelf, the review coming soon. So if you are a fantasy and m-m romance fan, what are waiting for, you should definitely check this book out!

Well, the barbarian could fight.

Posted by PurpleBook at 3:02 PM