Rocked Under (Rocked #1) by Cora Hawkes 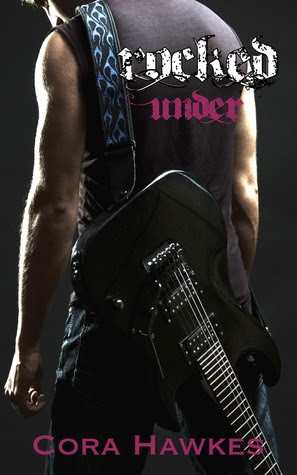 "Nineteen year-old Emma Harrington’s number one rule is; Never give your heart away to a man, no matter what. That lesson was learned early on in her life and she will never forget it.

Starting over in the USA, Emma starts college with her cousin, Ashley. She is finally free to do and live how she wants and no man will ever rule her decisions or emotions again.

That is until Scott Mason walks on stage…

Intense, bad boy Scott is the lead singer in a local and popular rock band. Ladies man and Ashley’s longtime friend, Emma is instantly drawn to him, even though he is everything she hates and needs to stay away from in a guy. He treats females like he does a cigarette; light it, use it, and lose it.

For her cousin’s sake, she makes an effort to get along with Scott. She soon discovers that there is more to Scott which makes him even more dangerous in her eyes. Underneath the façade of friendship; jealousy, obsession, fear and insecurities, fester and battle it out as she fights her attraction and history from repeating itself.

One thing she knows for sure is that if she breaks her rule, it may destroy her.

Ok, this is going to be a ranting review because it was just bad. I really, really don't like writing negative reviews but honesty is more important.

First - I see the author is English. But how does an English person not know how to discern "your" and "you're"? It was used wrong in at least two places and it just hurts my eyes!

So, this book is sort of a bad copy of Thoughtless and Beautiful Disaster. We have a hot rocker Scott that is "perfect" except he's a big ladies-man(you didn’t even had to guess, ha?). And we have one "innocent" virgin with daddy issues. She moves into the rocker's building with her cousin Ashley and they all warn her of him.
And she's all "no, I'm not gonna fall for him. I'm not giving my heart to anyone. No one will have that kind of power over me... yadda, yadda, yadda. "

She was such a bitch refusing poor Scott all the time. She acted like the world will end if she lets a guy in her life. And all of that just because her father (one person mind you) made a mistake and cheated. Not everyone is the same, woman.

But ok, Scott was a bastard too. So again, he’s portrayed like some goodie-two-shoes with only one flaw: every night - different woman of course. And Emma is the first one to refuse him and he falls in love with her and suffers for her and I'm all like this..

The thing that bothered me most is that she keeps refusing him throughout the book and being a f*cking bitch about it making him jealous – dancing with other men, kissing random people on purpose and when he gets mad she’s all : "Oh God, I’m such an idiot."

Also, what’s with Scott taking women home even after he met Emma? He even said that when he was with them he imagined her. That’s so messed up! She could hear him and see him with them! Yeah yeah, he’s SUCH a great guy… -.-
It took them what felt like a year to get it on, even then I was disappointed. I think that those 'almost kissed' scenes were much hotter the the actual sex. And for God’s sake, stop using the word ‘tummy’ when you’re writing a sex scene! Even teenagers don't say that word - it kills the fire!

So why did I give the book 2 stars? I liked the cousin Ashley. And because I’m a sadist, because I liked seeing them suffer and in desperation like this, expecting an awesome happy ending. I totally regret this.

In conclusion, our dear boss, Glass explained the book perfectly in just one sentence:


"Good girl with daddy issues meets the player with commitment issues... In the end they fuck happily ever after..."

Well said, boss. We love you!