ARC Review: BEG FOR IT by Megan Hart 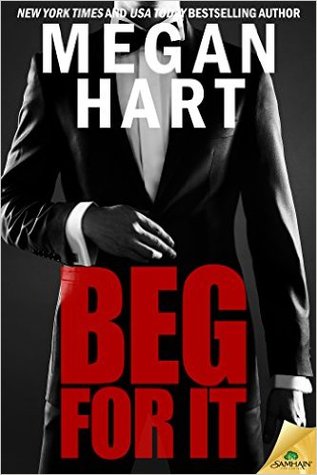 
He’s gonna have to beg for it…

Corinne was young once. She did everything—girls, boys, drugs, toys—and did it in high funky fashion. Reese wasn’t her first lover, but he was the first to submit to her. For a while they had something special, but it ended badly.

She’s a little older now. And the wealthy businessman who just bought the company she works for bears little resemblance to that boy. He’s commanding, domineering, and seems hell-bent on pushing her past her limits.

In a flash of anger, she falls back into their old pattern—and Reese falls right in with her. Before she knows it, she’s testing him. Then tasting him. But she can’t afford to get involved again. Her life is complicated enough without throwing in a slew of kink.

Now if only Reese would stop making her feel like the goddess she used to be…and showing her who’s been the boss all along. Then…and now.

Beg for It is the love story of Corinne and Reese who were a couple when they were younger. A happy couple in love who in the bedroom were Ma'am and boy. BDSM-wise their relationship was DS. No SM, for which I was glad. They were happily in love, but life took them in different directions. Corinne wanted a career right where they were living, and Reese wanted to get as far away as possible, which he did. She got her career, got married, had children, got divorced. He became a successful businessman. After many years he came back to his hometown, and in Corinne's life. The anger they had towards each other showed its ugly face, but so did the attraction that was still there. Old flames were reignited, and Corinne and Reese were once again Ma'am and boy, only older and wiser that hopefully wouldn't repeat their old mistakes.

Almost all the books by Megan Hart were the ones she wrote for Harlequin MIRA, and to me those were stories about women's lives with romance as one part of it. Beg for It was mostly focused on the romance. We learn about the other parts of Corinne's and Reese's lives, but romance is in the spotlight, and we get to read about both heir past and present relationship. I like it when stories alternate between past and present, and Megan Hart does it especially well.