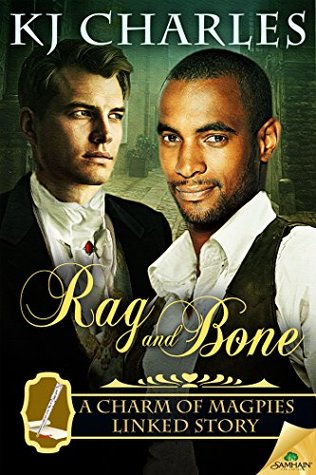 
It’s amazing what people throw away…

Crispin Tredarloe never meant to become a warlock. Freed from his treacherous master, he’s learning how to use his magical powers the right way. But it’s brutally hard work. Not everyone believes he’s a reformed character, and the strain is putting unbearable pressure on his secret relationship with waste-man Ned Hall.

Ned’s sick of magic. Sick of the trouble it brings, sick of its dangerous grip on Crispin and the miserable look it puts in his eyes, and sick of being afraid that a gentleman magician won’t want a street paper-seller forever—or even for much longer.

But something is stirring among London’s forgotten discards. An ancient evil is waking up and seeking its freedom. And when wild magic hits the rag-and-bottle shop where Ned lives, a panicked Crispin falls back onto bad habits. The embattled lovers must find a way to work together—or London could go up in flames.

This story is set in the world of the Charm of Magpies series.

Warning: Contains a warlock who needs to go straight (but isn’t), a waste-man running out of patience, blood magic, bad-tempered justiciars, and a pen with a mind of its own.


Books written by the very talented KJ Charles are the ones I look forward to reading the most these days, and each one proves Ms. Charles's place on my favorite authors list is well deserved.

It was the Charm of Magpies series that made a fan out of me, so any new story from that world is more than welcome. Crane & Stephen's books remain my favorites, and I don't see that changing in the future, but I am loving reading about all these other characters from that world.
Ned and Crispin were introduced in the story A Queer Trade in which Crispin's search for some dangerous papers led him to Ned's shop, and in which Crispin learned the awful truth about his master. I couldn't wait to see what happened next, and thanks to the kindness of Samhain and NetGalley, I was lucky enough not to have to wait a minute after finishing A Queer Trade to continue reading about Ned and his Freckles.

I have to say this about Crispin and Ned, and not just them, but all the main characters KJ Charles has written about: they were all so lovely and wonderful, and I loved reading about all of them. Ned and Crispin were especially adorable. I wouldn't have minded one bit had this book been solely about the progress of their relationship, which is something that regularly happens when I'm reading KJC's works. But that is never all her books have to offer. No, sir. They not only have characters I regret aren't real, and romance stories that give me all the best feels, they also have interesting plot lines. In the world of A Charm of Magpies, one can always count on some people with magic using it in a bad way, causing harm, and making Stephen Day's job difficult. Rag and Bone was no exception.

At the beginning of the book, things weren't going so well for poor old Crispin. Learning to use magic the right way, and not the way he'd been taught, the way he'd been doing it for so long was proving to be almost an impossible task. Not to mention most of the practitioners neither liked nor trusted him. The only good part of his day was when he saw Ned, but his troubles with magic caused problems in his relationship with Ned, too. It hurt my heart reading about their fights when it was obvious how much they cared for each other, and how highly they thought of one another. Now, those thoughts warmed my heart. As I said before, reading about them resolving the issues in their relationship would've been enough for me, but that was not all there was. Trouble was brewing. Big trouble. And Crispin & Ned found themselves right in the middle of it.

Everything that happened and Crispin's involvement in it didn't escape the attention of those in charge, which meant even more trouble for Crispin. The man couldn't catch a break. Luckily, Rag and Bone was set at the same time as Flight of Magpies, so Stephen was there to make sure Ned and Crispin got the ending they deserved.
Just like all the books in this series, Rag and Bone was on the shorter side, sadly. I could've read about these characters a lot longer. That is why the ending left me hopeful that in the future I'd get to read more about their adventures. The possibility is there, so I'll be keeping my fingers crossed.

In the end, all I can say (again) is that KJ Charles is an incredible author, and I cannot recommend her books enough. Read them, read them now!