ARC Review: NOT SAFE FOR WORK by L.A. Witt 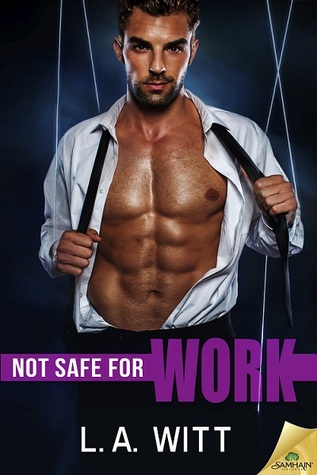 
They’re a match made in the dungeon…until their secret gets out.

Bored senseless in a meeting, architectural modeler Jon McNeill amuses himself with a kinky dating app on his phone. Then the app matches him with another user…who’s six feet away. Suddenly Jon finds himself on the same page as someone way above his pay grade: millionaire property developer Rick Pierce. His firm’s biggest—and hottest—client.

The app isn’t kidding either. They’re a perfect match. Jon’s a Dom, Rick’s a sub, and bondage is their thing. Both guys are well into their forties, know their way around the bedroom, and definitely appreciate a good suit. And the best part? They’re a match outside the bedroom too.

But office relationships aren’t easy to keep a secret. When the truth comes out, Jon is certain he’s about to get fired. Instead, his bosses throw him a curve ball—an ultimatum that puts both his job and his relationship in jeopardy.

Warning: Contains literal and figurative sex machines, blindfolds, a sub being punished during a business meeting, enough rope to tangle up a millionaire, and a Golden Girls marathon.

This book and I, we weren't on the best of terms for a long time. Odd, considering M/M + kink = my favorite combination, and that so far if there was anything I could count on in L.A. Witt's books is that they would be hot. This one failed to meet my great expectations.

The story didn't have a fan in me for several reasons.

Its plot is perfectly described in the blurb, so no need to repeat it. I will say the part about kink was the one that made my finger click on that Request button on NetGalley. I found it interesting the main characters would connect through a kinky dating app, and in a meeting no less. It said they were a match made in the dungeon, and I wished to know more. Unfortunately, it was Jon & Rick's D/s relationship with their kinky games I found underwhelming, and that is the last thing I'd want to feel about kinky games. As it was, Jon & Rick played light. Fans of glitterkink would probably enjoy this more. As for me, it was much lighter BDSM than I'd have preferred. I keep thinking that perhaps I would've liked it more had the story had Rick's POV because he was the submissive in their relationship. I'll never know as Jon's was the only perspective I got to read.

That brings me to the issues I had with Jon's POV. For one, I would've edited out quite a few of his thoughts, including those preceding his nights with Rick. He would go on and on about the endless possibilities of what he could do to Rick, and then actually not do much. After he started seeing Rick his life was mostly work and Rick, and the work part... well, I didn't need so much of it. He pretty much hated his job, and to read about it over and over again wasn't fun. Also not fun: every time Rick would do something Jon didn't tell him to do, or took charge even a little, Jon would call him out on it. It made me mad, and it made me wish they were vanilla. I think that would've been fun, and hot, so, so hot.

My major issue with this book was its length, as in I wished it was much shorter. As to why, I believe it's clear from what I've said so far.

That said, it was thanks to those many pages that at some point towards the end, I started to get into the book. This turned out to be a story that slowly and unexpectedly grew on me. All those things that had annoyed me (as listed above) didn't annoy me anymore. I began to root for Jon to find his happy ending, and that was the only thing that mattered.

In conclusion, even with all those issues I had with it, reading Not Safe for Work wasn't a total bust as I had started to think it would be. We parted ways on a sweet note. So, yay!