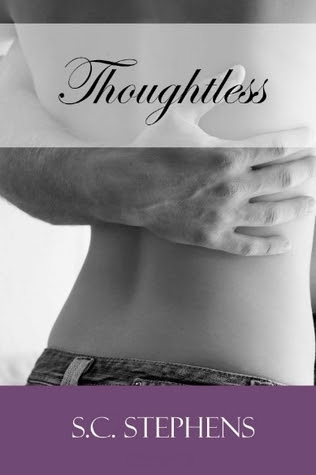 "For almost two years now, Kiera's boyfriend, Denny, has been everything she's ever wanted: loving, tender and endlessly devoted to her. When they head off to a new city to start their lives together, Denny at his dream job and Kiera at a top-notch university, everything seems perfect. Then an unforeseen obligation forces the happy couple apart.
Feeling lonely, confused, and in need of comfort, Kiera turns to an unexpected source – a local rock star named Kellan Kyle. At first, he's purely a friend that she can lean on, but as her loneliness grows, so does their relationship. And then one night everything changes...and none of them will ever be the same."

What I thought about it... (second time)

Do I seriously need to explain anything about Thoughtless? If I say Kellan Kyle, would we, girls, be on the same page? And finally, is there any other indie novel that's more popular than this book? Answer would be "No, there is not!"

I believe that most of you had already read S.C.'s story about Kiera, Danny and Kellan. There are few who didn't find it special and even used strong words like "hated it", but deep down, all of you have to admit that your heart starts beating faster when you remember the rock god and his D-bags.

I have confession to make - I have soft spot for S.C. Stephens and her novels. My "infatuation" goes that far that I even menage to tune out all of the things I usually find annoying when it comes to indie authors. Hell, this is second time that I've read it!

Last summer my biggest problem was the cheating part and Kiera's actions in the last third of the book. I wasn't comfortable reading about infidelity - I am extremely jealous and possessive type. But now, probably because I got over it after reading second book, it wasn't that bad. Someone described Thoughtless as melodramatic - well, it is. It's story about love triangle with ordinary girl, Australian stud and bad boy with rock band who sleeps with everything with... Ugh, what's the polite word? Vagina? On 546 pages! Others said that it was too repetitive. I have to agree. But maybe because of that, story was kind of believable. Relationship isn't rushed, you see every aspect of it. Maybe it was over the top in the end and some parts could have been written differently - but I still love this book. Lets hope that Simon and Schuster found good editors and that they wouldn't just "repack" it and push it back on market.

S.C. Stephens knows how to make good plot - she pulls you in the fictional world and makes you feel everything her characters are feeling. Now, I have to stay true to myself and take out my bitchy pen. Writing could have been so much better. She uses too many adjectives, there are unnecewith ssary dialogues and lot of "described conversations" that should have been written as dialogues because they were important part of the story or character development. Kiera is "blushing deeply" at least three times on one page. That type of repetitive writing was my biggest problem, this time, with Thoughtless. God, I hope that she got really good editor. I'll be waiting for S&S edition just to see what they will do it.

Third book, Reckless, should be out on March 5th next year. I know, we have to wait extra three months. Meanwhile, all you fans can buy T-shirts, mugs and what not on official web shop: Kellan Kyle's Merch Shop.


My music background:
Maverick Sabre - No One  / lyrics

***Note! This review is originally posted on Ja čitam, a ti?
Posted by Glass at 4:16 PM