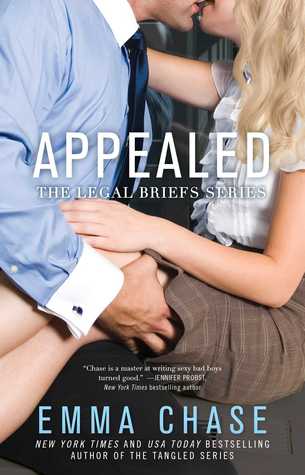 The New York Times bestselling author of the Tangled books returns with the third romance in the Legal Briefs series, a collection of sexy novels about first crushes, second chances, and the final verdict of the heart.

When Brent Mason looks at Kennedy Randolph, he doesn’t see the awkward, sweet girl who grew up next door. He sees a self-assured, stunning woman…who wants to crush the most intimate—and prized—parts of his anatomy beneath the heels of her Louboutins.

When Kennedy looks at Brent, all she sees is the selfish, Abercrombie & Fitch catalogue–worthy teenager who humiliated her in high school in order to join the popular crowd. A crowd that made those years a living hell for her.

But she’s not a lovesick social outcast anymore—she’s a Washington, DC, prosecutor with a long winning streak. Brent is the opposing attorney in her next case, and Kennedy thinks it’s time to put him through a little hell of his own.

But things aren’t exactly working out the way she planned. Brent has his sights set on Kennedy, and every fiery exchange only makes him want her more—and makes her wonder if he’s as passionate in the bedroom as he is in the courtroom. In the end, they may just find themselves in love…or in contempt of court.


We’re soul mates. Destined to be together, written in the stars, Bogie-and-Bacall perfect.

Kennedy doesn’t see it yet— but that’s all right. Because I’m patient . And relentless. When I set my mind on something, there’s nothing I can’t do.

Appealed was a fun, sexy, sweet, interesting romance, and, as usual when it comes to Emma Chase's books, a delightful read.
This is unfortunately the last book in The Legal Briefs series. It's a shame there aren't more partners in that firm, so I could continue enjoying reading about this group. Oh, well... I'll just have to wait for other characters to inspire Ms. Chase to write another series.

After Stanton & Sofia found their HEA in Overruled, and then Jake found his with Chelsea and her six nieces and nephews in my personal favorite Sustained, it was Brent's turn to find his HEA with the woman he thought was lost to him, Kennedy.

Since I'm a reader who's been known to like her romances with a side of past unresolved issues between the main characters, this book was a good choice. Even though it had flashbacks to the high school drama I abhor reading about or watching, it didn't take away from my enjoyment. The story as a whole was too fun to mind it. I already knew from the blurb Brent and Kennedy had history. They'd lived next door to each other, and went to the same high school where Brent had done things he shouldn't have, and hadn't done the things he should have. The truth about that time in their lives was a bit more complicated, and not what they thought it was. And in present time, Brent was determined to make it all up to Kennedy, and then some.

The present was where all the fun could be found. The moment Kennedy walked back into Brent's life, completely changed, and as a prosecutor determined to send his client in jail, was the moment things got interesting. Hot and interesting, and they remained that way. From their ever amusing bickering to their sparring in court to the sexy times to the sweet and tender moments, it felt like I just flew through the novel, and got to the end regretting the journey was already over. What I liked most in Brent & Kennedy's journey to their well-deserved HEA was Brent winning back her trust, and not just because I was such a Brent's fan, but because of Kennedy who had major trust issues after getting badly hurt in the past.

Besides Brent and Kennedy, Appealed had several minor characters who made it even better, plus there were updates on the previous couples. Needless to say, the update on Jake was what interested me the most. Out of all the scenes in the book, the one with him and the kids was the one that made me all teary-eyed.

The story and the series were nicely wrapped up in a cute epilogue about what the future holds for all of them. It was a good one...
Oh, and if you were wondering, the entire book is written from Brent's perspective, so the fans of Ms. Chase's male POV books can add Appealed to their Must Read list.

*****
**The quote was taken from the uncorrected proof, and may have been edited before publication.

***ARC provided by the publisher in exchange for an honest review.***
My reviews of the previous books in this series:


and other books by Emma Chase: